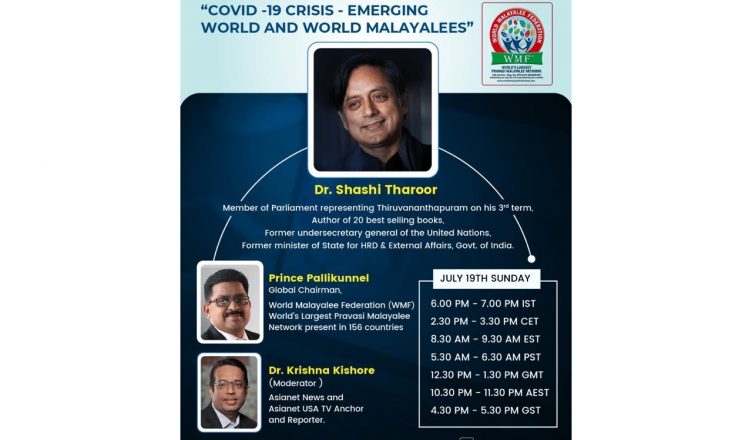 The World Malayalee Federation, which is the largest ‘Pravasi Malayalee Network’, with members from 156 countries is organizing an interaction session with senior Congress leader, Dr. Shashi Tharoor on the 19th of July at 6 pm Indian time.

With the pandemic crippling normal life, Dr. Shashi Tharoor has been strictly adhering to the public health advisories. Nevertheless, he hasn’t allowed the restrictions to hamper his interactions with people and has been actively listening to people from various walks of life via video conferencing. Dr. Tharoor who recently achieved the distinction of being the longest serving MP of Thiruvananthapuram, will address a video conference via Zoom to discuss ‘Covid-19—Emerging World and World Malayalees’. The objective of the conference is to discuss the challenges the Malayalee diaspora will face in the wake of the Covid-19 pandemic.

Dr. Tharoor is widely lauded for his untiring efforts to alleviate the sufferings of people during the pandemic. He was proactive and worked to secure exemptions in the rules of the Member of Parliament Local Area Development Scheme (MPLADS) funds to ensure that crucial testing kits and other medical equipment was made available to medical personnel in his constituency. Shortly thereafter, the union government suspended the MPLADS scheme for two years citing a financial crunch.

In addition to serving the people of his constituency, Dr. Tharoor has also made immense efforts to bring relief to Indians stranded abroad as the result of the lockdown. Given his bipartisan approach and the efficiency of the All India Professional Congress, (AIPC) which he leads, Tharoor has helped several Indian expats stranded across many countries return home to safety.

However, the magnitude of the aftereffects that the pandemic will result in is yet to be fathomed. The economic wreckage it will leave behind will perhaps be the greatest crisis of our times with millions of people losing their livelihoods. The pandemic is fueling extreme nationalism and even xenophobia in some societies. Several countries are considering cutting down on immigration. Kuwait has recently passed a bill to cap the number of foreign workers in the country. As a result, an estimated 8 lakh Indians will be sent back home and India, which is the largest receiver of remittances in the world is likely to have more trouble on the economic front. In the year 2016-2017, Kerala continued to lead the country by receiving about 19% of total remittances sent to India.

Several experts estimate that the dream run Kerala has had will be curtailed due to the pandemic induced economic crisis, thereby making several Malayalees anxious. Such challenges and the plausible solutions are being widely discussed by the Malayalees across the world. Given that the people of Kerala, are known for their enterprising nature, they are likely to face the challenges with the support of their political leadership.

It is in this backdrop that the World Malayalee Federation is organizing the interaction with Dr. Shashi Tharoor, to gain an insight into the challenges India and Kerala in particular face in the wake of the Covid-19 pandemic. The interactive sessions will be shared on the social media accounts of Dr. Shashi Tharoor.