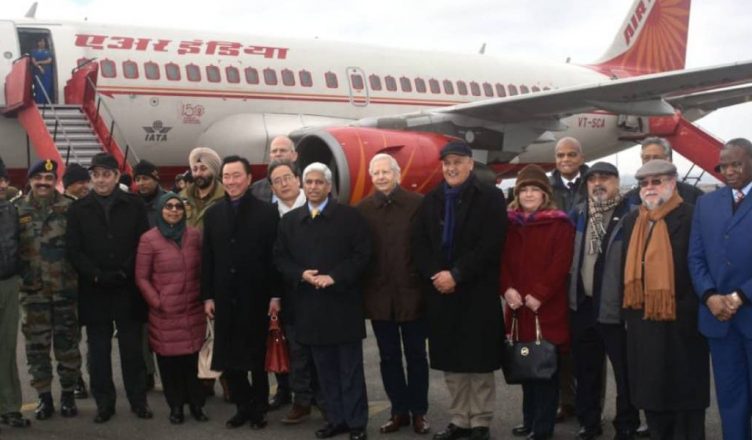 While the people in Jammu and Kashmir (J&K) are still under a blanket of darkness, far away from news of the outside world, a team of 16 envoys and senior diplomats visited the region to assess the ground situation.  The delegation of the envoys included diplomats from the United States, Norway, four countries in Africa and South America and the rest from Asian countries like Bangladesh and the Maldives.

This will be the second time that foreign delegates were taken to J&K since the Centre revoked the region’s special status, scrapping Article 370, and made it into two union territories. In October, 23 Members of Parliament of the European Union (EU) visited Kashmir on an extremely orchestrated tour. Out of the 27 who arrived in India, of which four didn’t visit, only three members were from Liberal or Left parties. An MP from the United Kingdom’s Liberal Democrats party, Chris Davies, stated that his invitation was withdrawn after he asked for permission to speak freely and openly to the people.

This time, no delegation from the EU wanted to be a part of a visit, calling it a “guided tour” of the region. They were denied the right to move around freely or to talk to any of the locals the first time around, and so, didn’t see the point of a false, coordinated and a deceptive journey. One member of the EU delegation post his visit, claimed that the group was aware that “some people were being kept away from us”. The entire purpose of the visit was defeated when they weren’t allowed to actually assess the ground reality, making it a worthless waste of their time.

At the same time, while foreigners are being allowed to access the region, Indian MP’s are strictly forbidden from entering Kashmir. Indian opposition leaders, including Rahul Gandhi were prohibited to leave the airport in Kashmir. The parties, including Congress, the Communist Party and the All India Trinamool Congress, wanted to assess the situation in the valley that has been subjected to prolonged lockdowns, illegal detentions, violence and restrictions.  It came as a shock to the leaders that they were barred to leave the airport even though foreign nationals were taken on a tour of the region. Indian opposition leaders must bang the doors of the Supreme Court for access, while Europeans and now, other foreign nationals are invited specially by the Prime Minister’s Office. The nationalism that the ruling government prides themselves upon vanishes when they allow members of foreign nations but not those from India to visit the land of their own country. Moreover, now you’re claiming that it is an “internal matter,” make up your mind Modi Ji!

Read about the first visit: EU MPs are allowed to visit Jammu and Kashmir while Indian MPs are denied entry. WHY?

Analyzing the situation of the first and second visit to J&K raises several questions; why were majorly right-wing EU politicians called for the first visit? Why then were they not allowed to speak or roam freely? Such instances clearly indicate that the government has something to hide and that J&K has still not returned to normalcy. This doesn’t come as a surprise, as recently BJP’s own Union minister for tourism Prahalad Singh Patel was caught in a lie regarding J&K. He lied to the Parliament that there had been no significant impact on the tourism in the valley since the scrapping of Article 370. However, an RTI later revealed that there had been a sharp decrease with a 71% decline between the months of August to October 2019.

One secret has been revealed BJP. How much are you going to hide and for how long? The truth is going to come out one day, and that day is close. The world, and most importantly, your fellow Indians, are watching how you are denying opposition leaders the right to visit the valley, while you’re welcome foreign delegations with open arms. We see how you only choose to tweet your dissent when peaceful protestors carry banners saying, ‘Free Kashmir’ and not when students are brutally beaten by your youth organization. The valley will see light, and when it does, there will be nowhere to hide.