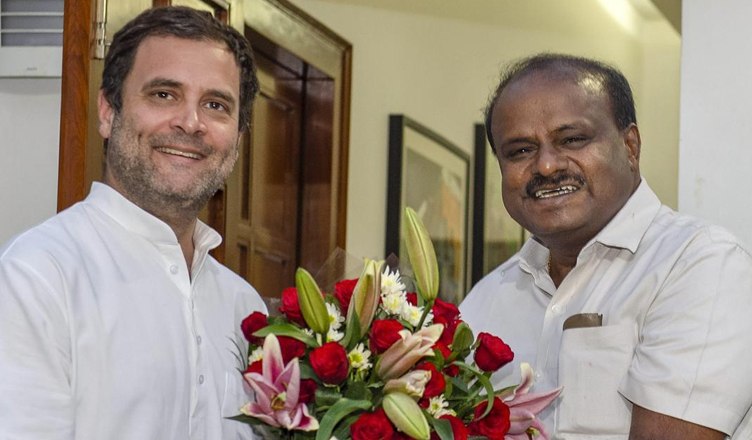 The Supreme Court on Tuesday refused to urgently hear plea against invitation to the Congress-Janata Dal (Secular) (JDS(S)) to form the government in Karnataka. The plea was filed by the Hindu Mahasabha which termed as the post-poll alliance between the Congress and JDS as opportunistic and said it cheated voters.

In the plea, it sought the apex court to cancel Karnataka Governor Vajubhai Vala’s order inviting the Congress-JD(S) alliance to form the government in the state. After the apex court’s refusal to urgently hear it, the matter will now come up for a regular hearing.

Meanwhile, legislative party leader of the JD(S) HD Kumaraswamy is scheduled to be sworn in as Karnataka’s Chief Minister tomorrow.

Even after post-poll alliance between the Congress and JD(S) leading to a total of 117 seats in their baskets and crossing the halfway mark of 112, the BJP wrongfully claimed stake to form the government in Karnataka. Even the Governor invited the BJP to form the government despite them being 8 seats short of the required number.

However, when the Supreme Court preponed the floor test from 14 to 2 days, it was obvious for the BJP to lose. It was too less a time to resort to dirty tactics and indulge in horse-trading. In fact, they did try to buy Congress and JD0S(S) MLAs but they remained loyal to their parties and did not fall in the BJP’s trap.

Also read: In India, will of people is everything: Rahul Gandhi post Yeddyurappa’s resignation

As a result, BJP’s BS Yeddyurappa had to resign from the post of Chief Minister. He resigned without facing a floor test as he and the BJP both were sure of their incapability to prove majority on the floor of the House and thus to save themselves from embarrassment, they decided to let Yeddyurappa step down.