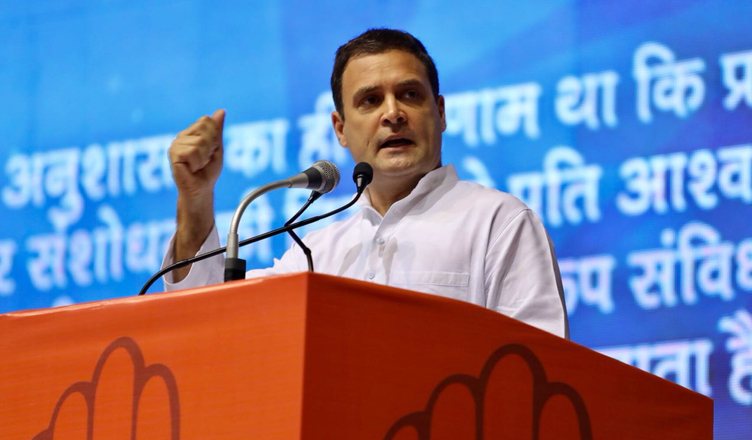 While launching the massive ‘Save the Constitution’ campaign, Congress president Rahul Gandhi launched a scathing attack on Prime Minister Narendra Modi over multiple issues. Right from sabotaging the institutions to women safety, rising hate crimes to communalisation, Dalit atrocities to dilution of the SC/ST Act, the Congress president hit out at Prime Minister Modi over every disturbing topic prevalent in the country.

Hinting towards PM Modi’s anti-Dalit mindset, Rahul Gandhi quoted a statement from the latter’s book “Karmyog” and said that Modi thinks that a person from backward class who cleans toilets and gutters gets spiritual happiness. “This government has no place for Dalit and backward class people in their hearts. The atrocities against backward class are increasing, and the person who sees manual scavengers getting spiritual happiness does not speak a word after all these incidents,” Rahul Gandhi said while addressing the launch of the ‘Save the Constitution’ campaign.

Taking potshots at Prime Miniter Modi, the Congress president said, “Modi ji has interest only in Modi ji.” He further said he is only interested in becoming the Prime Minister of India and only wants the country to hear his Mann ki Baat. Talking about the recent rapes cases, Rahul Gandhi said that the ‘Beti Padhao, Beti Bachao’ slogan has been reduced to only ‘Beti Bachao’. He further says that the daughters need to be protected “from MLAs and MPs of BJP.”

Attacking the government over judiciary crisis and government’s interference in its functioning, Rahul Gandhi said, “We will not allow the BJP and RSS even to touch the Constitution, and neither will the country in 2019”. “Our institutions were gifted to us by our Constitution. The Modi Govt is now destroying these institutions by appointing RSS ideologues to occupy important positions,” the Congress president added.

Challenging PM Modi, Rahul Gandhi said, “Just give me 15 minutes for a debate with the Prime Minister and I will grill him on Rafael deal, Nirav Modi”. Gandhi said Modi will not be able to speak.

Hitting out at recent criticism of doctors by Prime Minister in London, Rahul Gandhi said that the Congress made global reputation of India in 70 years and PM Modi has hurt its image in just four years. “We have to protect it,” he said.

Stressing on the fact that India is a secular country, Rahul Gandhi said that the country belongs to every single citizen and it is their (Congress) duty to save the Constitution.

While concluding his speech, Rahul Gandhi said with assertion, “Our job is to listen to the people of India to protect them, their ideas and build their future. No matter how much effort BJP puts in we will not allow them, to toxicate the Constitution. They will see the power of Congress in 2019”.