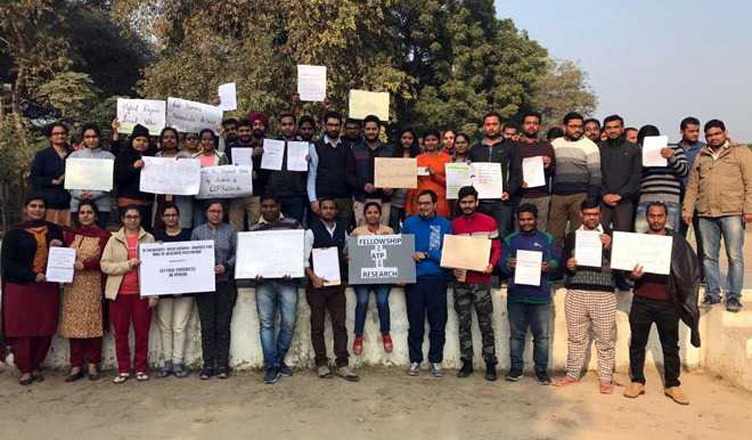 Research scholars across centrally-funded institutions such as the IITs, IISc, NITs or the IISERs have come together to launch a nationwide protest demanding a hike in their fellowship amount.

The last revision of the 1.25 lakh research scholar community, a hike of 56 per cent, took place in 2014 under then Human Resources Development (HRD) Minister Smriti Irani.

The scholars, part from rising cost, have also stated that the hike is essential for them as 60 per cent of the scholars support their families also.

“Several meetings and frequent rounds of government offices haven’t yielded any results. We researchers have no option but to keep going to the ministry and UGC. We have visited MHRD at least 10 times but even that didn’t work out. What is unfortunate if that even in 2014 the fellowship was revised after a similar protest,” Nikhil Gupta, national representative and coordinator of the movement and a research fellow at the Centre of Biomedical Research, Lucknow told The Times of India.

“The economic development of a country has a strong correlation with the research and developmental efforts which in turn requires more manpower. To increase manpower in research the stipend given to students should be attractive,” he added.

Gupta further told that there has been an increase in salaries of those working in private sector or government, but not of research scholars. He argued that while there has been no increase in the fellowship of the researchers, their contribution towards the society is no less.

“With inflation and unrevised fellowships for past four years, it has now become a struggle for survival,” he told TOI.

“Since October 2014 there has been no announcement on the increase in fellowship which is the major cause of the agitation,” The Times of India quoted a research scholar at IIT-Kanpur, Manoj Chahal, as saying.

Another issue raised by the scholars is irregular disbursement of the fellowship to scholars, which makes it difficult for them to manage their expenses.