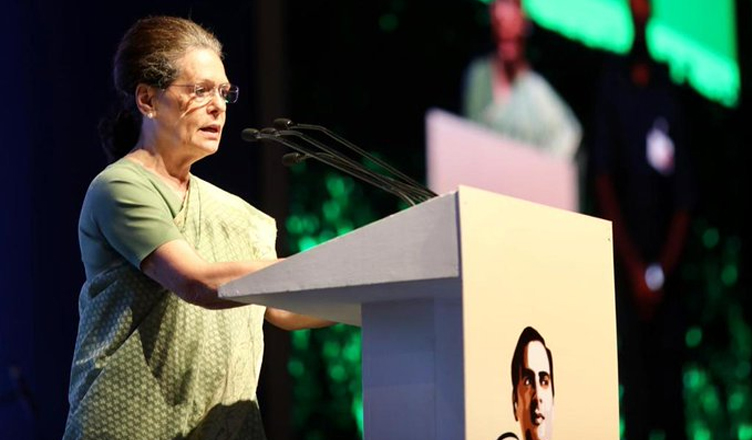 “Rajiv ji never posed a threat to democracy, he never suppressed public opinion. His ethics and honesty always inspired him. The way Rajiv ji took care of democracy, the country’s pride, keeping people’s freedom alive, nobody is taking care of the nation today like him,” Gandhi said while speaking at an event marking Rajiv Gandhi’s 75th birth anniversary at KD Jadhav Indoor Stadium in New Delhi.

She further said that the former Prime Minister wanted to build a strong and self-reliant India and he wanted his country to be the one that kept diversity and unity together.

“He wanted to build a strong and self-reliant India. An India whose citizens get to live a respectable life, an India that moves forward on the energy of its youth. He made India fundamentally stronger. It was his commitment that the youth get voting rights at the age of 18 and that Panchayats should be strong,” Gandhi said.

“Rajiv ji dreamed of making the country a forerunner of IT and he also fulfilled this dream. He also empowered the country by using science and technology in agriculture,” she added.

Throwing light on his other achievement, the Congress President said that Rajiv Gandhi gave a new direction to the education of the country by bringing an education policy in 1986.

“Jawahar Navodaya Vidyalaya established by Rajiv ji is the pride of the country today, where innumerable rural children are getting education,” she said.

She also said that the work done by Rajiv Gandhi is something that cannot be done merely with slogans and pride, rather, “it needs hard work and strong will.”

“He always kept the national interest in mind and made several agreements in Assam, Punjab, Tripura, Mizoram,” she said.

While concluding, Gandhi said that on the occasion of Rajiv Gandhi’s 75th birth anniversary, it was time to pursue his dreams, his vision and his contribution.

“Our fight against divisive forces will continue. We will not let our ideology weaken,” she said.