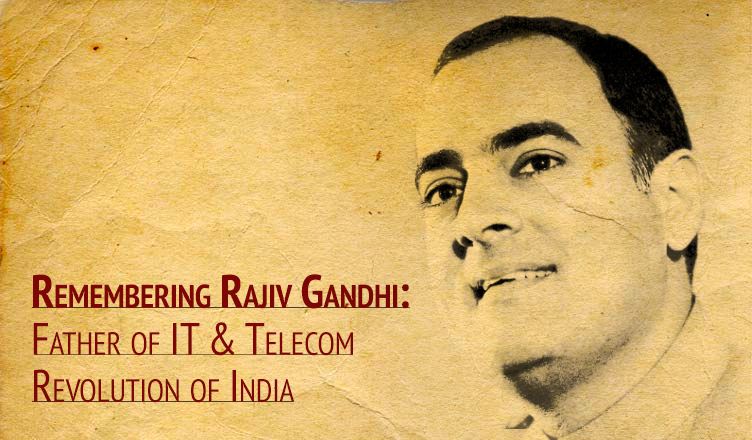 It is correct to say that former Prime Minister Rajiv Gandhi laid the foundation of a modern India.

Rajiv Gandhi is rightfully known as the architect of digital India as he provided the political will that was needed in Telecom to transform the entire industry. India then had about 2 million telephones. It used to take 10 years to take telephone connection. Today, we have over 1.2 billion telephones.

Rajiv Gandhi helped and encouraged in creating a new model of development in Telecom, development that was based on using digital technology to build digital networks in India in the early 80s. Indigenous development, where Indian talent could be used from many universities.

His ideas were very new. No one believed that India could build and manufacture its own digital products in India itself. It was considered the biggest gamble by the government.

In order to develop state-of-the-art telecommunication technology, Centre for Development of Telematics (C-DOT) was established in August 1984 under Rajiv Gandhi’s government.

Also read: When Rajiv Gandhi lowered the age of voting

Towns and villages of India saw a boost in their communication network, courtesy C-DOT.

The PCO (public call office) revolution also took place under Rajiv Gandhi’s government. PCO booths not only connected the rural and urban areas but also connected India to the world outside.

Further push to the telephone network was given by the establishment of MTNL (Mahanagar Telephone Nigam Limited) in 1986.

Sam Pitroda was Rajiv Gandhi’s advisor then. These technology missions were established then.

“We were given 36 million Dollars then and 36 months to develop. He encouraged us, he challenged us, he supported us and we delivered. What we delivered then in terms of rural automatic exchange (STD/PCOs) etc created local industry worth billions and billions,” Pitroda recalls.

A plan for mobile telephony was also launched at the time. Mobile revolution changed the concept of connectivity in India. “Everything you see today has deep roots in Rajiv Gandhi’s era,” Pitroda said.