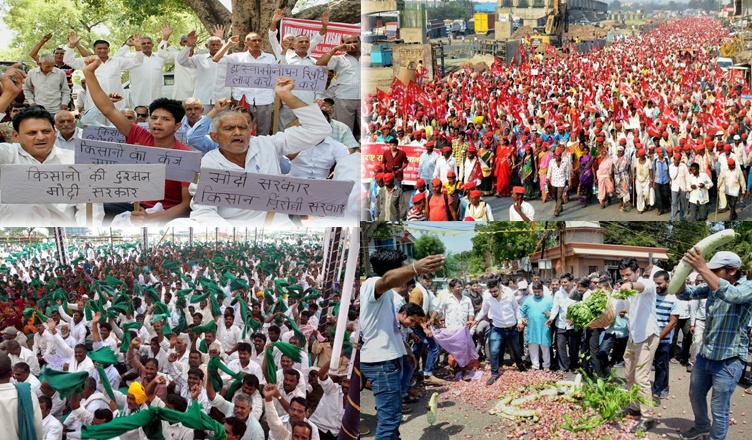 India’s farmers are reeling under the impact of demonetisation, GST and massive loan burden and Narendra Modi-led BJP Government seems to be absolutely apathetic towards their woes and grievances.

As a result, farmers have come down on streets to protest against the government anti-farmers policies and express their anger against the present ruling dispensation.

Farmers all across the country were hit hard due to demonetisation. Consequently, the farmers all over the country staged protests, chanting slogans against the government and asking for their rights.

In Maharashtra and Madhya Pradesh in June 2017, farmers threw away grains and spilled milk on streets to show their resentment against Prime Minister Narendra Modi’s disastrous move of note-ban.

In September 2017, a huge protest was witnessed in the National Capital by the Tamil Nadu farmers demanding loan waivers, revised drought packages, a Cauvery Management Committee, and fair prices for their products, among other things. Their method of protests was unique, including biting mice and snake bits, holding mock funerals, threatening to drink their own urine, and allegedly eating their own excreta.

In September again, last year, Rajasthan farmers had taken to roads and blocked national highway with regard to the same.

Currently, Maharashtra is witnessing another such wave of farmer resentment. Nearly 40,000 farmers began their protest on March 6 from CBS chowk in Nashik and reached Mumbai early this morning after covering a distance of over 160 kilometers in the last six days.

The farmers have a number of demands including complete loan waiver, an overhaul of the river linking scheme keeping in mind the tribal villages and implementation of recommendations made by the Swaminathan Committee report from Devendra Fadnavis-led BJP Government in Maharashtra.