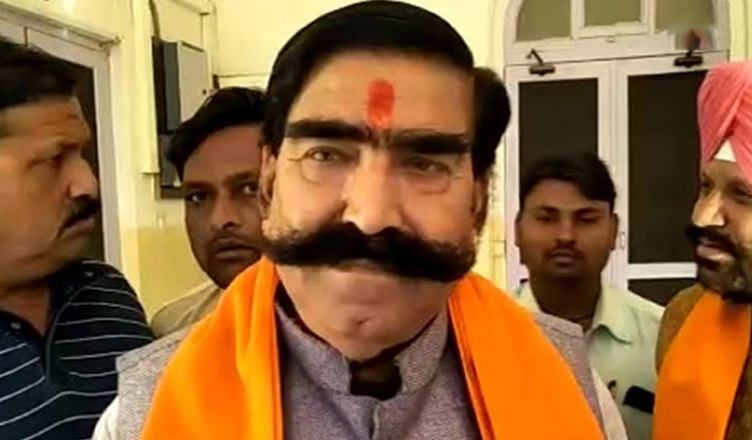 While commenting on ‘love jihad’, a term coined by Hindu right-wing groups suggesting marriage between a Hindu girl and a Muslim boy, Ahuja warned the people indulging into the same to let go off the Hindu girls being lured into this trap of ‘love jihad.’

According to ANI, Ahuja on Wednesday said, “Hamari jo ladkiyan gayi hai,love jihad ka lobh deke le gaye ho,uske liye time doonga. Ya unko laao nahi to phir 10 gayi hai to 20, 20 gayi hai to 40 aur 40 gayi hai to 80, phir tumhari betiyaan surakshit nahi hogi kyunki tumne balat dharm parivartan kiya hai (I will give you time for bringing back those girls whom you have lured with love Jihad. Otherwise, if 10 girls have gone then 20, if 20 have gone then 40 and if 40 have gone then your 80 daughters will not be safe because you have forced religious conversion).”

Issuing a direct threat to the minority community, Ahuja went further by saying that just like Lord Krishna, they would also resort to “chaal, chhaddam aur sangharsh” to end this “evil.”

“Bhagwan Sri Ram to maryada mein rahe, Krishna bhagwan ne saari maryadaein tod kar dharmuddh kiya aur dhram ki sthapna ki. Jarasandh kaise marega, Duryodhan kaise marega iske liye chaal, chhaddam aur sangharsh bhi karna padega to karenge (Lord Rama did not cross any limit, but Lord Krishna broke all limits to establish dharma. How will Jarasandh hie, how will Duryodhana die. If tricks, deceit and struggle is to be done for this, then we will do it).”

Looks like, this violent streak is present in majority of the BJP ministers.

Recently, BJP MLA T. Raja Singh said that Bangladeshis and Rohingya Muslims should be shot down if they don’t leave the country voluntarily.

“If these Rohingyas and Bangladeshi illegal immigrants do not leave India respectfully, then they should be shot & eliminated. Then only our country will be safe,” Singh, a member of the Telangana Legislative Assembly representing Goshamahal told ANI.

In another such instance, BJP MLA Basanagouda Patil Yatnal said, had he been the Union Home Minister, he would have issued orders to police to shoot all intellectuals.

Not only just this statement, the MLA from Vijayapura went more ahead by branding liberals and intellectuals as ‘anti-national’.

“These people (intellectuals) live in this country and use all the facilities for which we pay tax. Then they raise slogans against the Indian Army. Our country faces grave danger from intellectuals and seculars than anyone else. If I was Home Minister, I would have issued orders to shoot them,” he said.