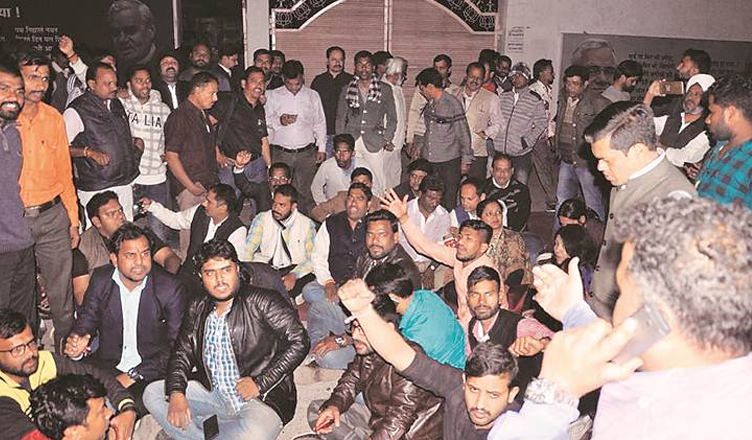 Following the Bharatiya Janata Party’s (BJP) refusal to accept their demand to suspend four party members for allegedly assaulting a journalist, journalists sat on an indefinite protest at Raipur Press Club on Sunday.

Journalist Suman Pandey, working with web portal Voices.in, had gone to the BJP headquarters in Raipur to shoot a review meeting when he was allegedly assaulted and forced to delete a video footage of BJP members arguing among themselves.

Journalists spent the Saturday night outside the party headquarters demanding the suspension of the four party members. Party chief Dharamlal Kaushik and senior leader Brijmohan Agrawal arrived at the headquarters to pacify the journalists but refused to suspend the members.

As a result, journalists sat on an indefinite protest at Raipur Press Club demanding their suspension.

The four BJP members were arrested and even a case was registered against them but they were later let off on bail. According to The Indian Express, journalists alleged that the four partymen were garlanded when they stepped out of the jail.

Journalists also said that there arrest was a police action and they want the party to take action against their members.

Journalists also told the leaders who had visited them that members of the BJP youth wing reached the protest at around 9 p.m. and were carrying sharp weapons with them.

One thought on “Raipur: Journalists on indefinite protest after BJP members assault journalist”