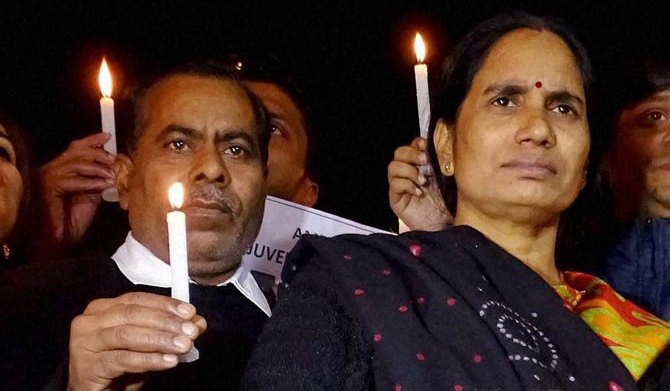 The brother of the victim in the 2012 gang-rape in Delhi that shook the nation is ready to start his career as a pilot.

His mother thanks Congress vice-president Rahul Gandhi for his effort after the stress and heartbreak of the last five years threatened to consume them.

‘Aman (name changed) is a pilot now because of Rahul Gandhi,’ said Asha Devi, who fought for years to get justice for her daughter.

‘The brutality of the crime against the 23-year-old, who was named ‘Nirbhaya’ — meaning fearless — provoked intense anger and weeks of protests across Indian cities and also hit headlines around the world.

All the accused were arrested and charged with sexual assault and murder.

One of the accused died in police custody. The four remaining adult defendants were found guilty of rape and murder and sentenced to death.

A juvenile too was convicted and sent to a reform facility for three years.

The tragedy deeply troubled Aman but he stayed strong.

Rahul’s regular phone calls motivated him to achieve what he wanted, his mother said.

When his sister was killed, Aman was in Class 12. He wanted to join the military. But the brutal crime sent him into shock.

‘Rahul Gandhi was the one who counselled him and motivated him to achieve something good in life to support the family. After learning that he wanted to join the defence forces, Rahul asked him to pursue a pilot’s training course after completion of school,’ Asha said.

After his CBSE board examinations in 2013, Aman got admission at Indira Gandhi Rashtriya Uran Akademi in Rae Bareli, the Congress leader’s parliamentary constituency.

‘While shifting to Rae Bareli, Aman made up his mind that he will prepare for the Indian Army’s recruitment examination. But after joining the course, he found it difficult. He never got time to pursue parallel studies,’ Asha said, quoting conversations with her son.

During his 18-month pilot’s training course, Aman used to get regular updates about the legal proceedings against the accused.

‘When he was studying, Rahul used to talk to him over the phone and taught him to adopt a ‘never quit’ attitude.’ she added.

‘Even after he completed his studies, he called him to find out about his training-cum-job.’

Aman is now undergoing final training with a commercial airline in Gurugram. He will soon fly a plane. Asha said even Rahul’s sister Priyanka calls them over the phone.

‘She often asks about our health,’ she said. Nirbhaya’s youngest brother is studying engineering in Pune.

Their father is a permanent employee at Delhi Airport and has a desk job.

On Wednesday, the Delhi Commission for Women (DCW) issued a notice to the city’s Tihar Jail administration and the deputy commissioner of police in the south district for delaying the execution of the death penalty awarded to Nirbhaya’s rapists.

Asha Devi had complained to the DCW, asking why the criminals have not been hanged as per the Supreme Court order which came five months ago.

2 thoughts on “‘Rahul is my son’s guardian angel’: Mother of ‘Nirbhaya’ praises Rahul”