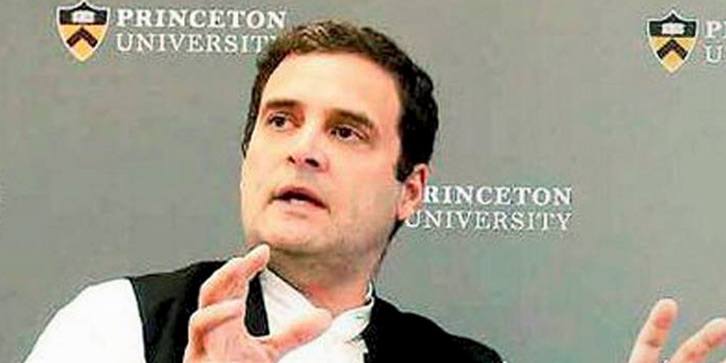 Congress vice-president Rahul Gandhi made a pitstop at Princeton University after a bedazzling Berkeley address, and left people with the same awe as happened after his previous address.

• Gandhi paid tribute to the tremendous national transformation since independence which was spearheaded by Mahatma Gandhi. India, says Mr. Gandhi, went from living in villages without much mobility or conversation to a society which underwent rapid urbanisation, thanks to the revolutions put in motion by the Congress as India’s Grand Old Party.

• He said the current Narendra Modi-led BJP has failed to provide Indian youth with jobs.

• Gandhi went on to link the Modi government’s flagship initiative, Make in India, to jobs. The Congress vice-president said that while he believed Make in India is a good idea, it’s targeting is not quite right.

• He believes Narendra Modi’s New India’s economic track record is concerning as it alienates 29,550 young jobseekers everyday who are unable to find their niche in the job market due to sluggish job creation.

• Mr. Gandhi warns that Modi Sarkar’s preference for increasing the centralisation of power and decisionmaking is not only outsourcing lawmaking from parliament to the bureaucracy and a ring fenced Cabinet, but that it is simultaneously stultifying this government’s ability to respond to emerging challenges and affecting the ability of institutions to evolve and remain relevant.

• In an economy the sheer size of India’s Mr. Gandhi believes that sectoral balance is key to containing disaffection and anger. No one sector can create sufficient avenues of employment, and there blue collar job availability is as important as jobs in agriculture, manufacturing and services.

• Why Mr Modi and Mr Trump rose is because of jobs. [A] lot of people don’t have jobs and they [Modi and Trump] can see [that].” Those who want jobs helped Modi reach where he is,” he said.

• Gandhi said there’s a lot of space for cooperation between the United States and India in the creation of jobs and in the education sector. “So I think a lot of synergy between the two countries,” he said.

• The Congress vice-president said India and China are two huge countries that are transforming from agricultural countries to urban modern model countries. And that’s a huge chunk of the world population and how these two countries do is going to fundamentally reshape the world.

• “The thing to realise is that China is moving with tremendous power and we have to work with that. “We have to figure out how to get our jobs. We have to basically compete with China,” he said.

• “To me the strategic relationship with the United States is important,” he said.

• He strongly believes that the world we are moving towards would benefit more from building networks over the concrete structures that are institutions.
Rahul Gandhi’s coherent and cohesive vision for India mark him out as a leader that India in all her diversity can rally behind towards inclusive and abiding prosperity.