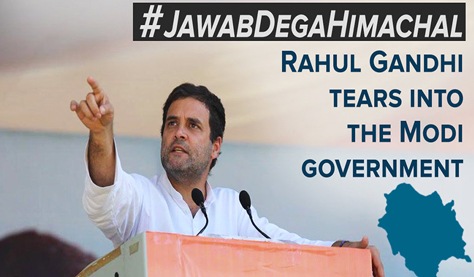 Using his characteristic wit, Mr. Gandhi, who was speaking in Mandi, pointed out how it is inherent in Modi’s very nature to make tall, unsubstantiated claims, that don’t reflect in actual work.

The Congress VP narrated an anecdote, wherein Mr. Modi once told a reporter that he had climbed upto 25000 feet in the mountains, wearing just slippers. “There is just one mountain in India whose height is more than 25000 feet. It is the Kanchenjunga. Many expeditions have attempted to go there. Many people have lost their lives in the process. But Mr. Modi did this on his own, wearing just slippers,” Mr. Gandhi said, to instant laughter from the audience.

This is not just a small, unrelated anecdote, but also reveals how the PM loves to spin yarns with his big talk.

“Before elections, Mr. Modi had promised that he would give jobs 2 crore youth every year. 30000 new job seekers enter the market in every 24 hours, but this government is able to provide jobs to just 450 of them. China provides 50000 jobs per day to its youth. On top of that, a minister in Modi’s cabinet asserts that unemployment is a good sign as it means more youth will become entrepreneurs,” Mr. Gandhi said.

He then proceeded to burst the much-hyped “Gujarat model of development” by listing out statistics that showed how Gujarat fared in comparison to Himachal Pradesh in several areas like state-run medical colleges, schools, widow pensions, unemployment allowance etc. The data from the last 5 years illustrated how Gujarat lagged behind Congress-ruled Himachal Pradesh.

Mr. Gandhi warned against rising anger in the youth,and farmers, due to severe mismanagement of the economy, which had hurt them the most. On Demonetisation, he narrated how Mr. Modi, without consulting his cabinet, or the Chief Economic Adviser, had gone ahead with a bad idea that impacted the lives of the poor, the farmers, and small shopkeepers, who deal mostly in cash. On, GST too, the Modi government had adopted a pro-big business attitude, by throwing the concerns of the smaller business out of the window, he said.

Concluding, he appealed to the people to not fall into the trap of the “Gujarat model”, and to repose their faith in the tried and trusted Virbhadra Singh, the longest serving CM of the state, who has taken Himachal to new heights.

The cracks in Mr. Modi’s rhetoric are getting exposed every day, and the people are watching.