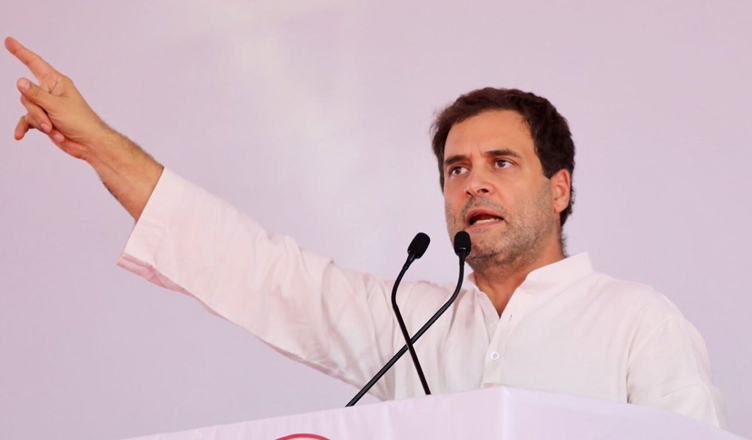 Hitting out at Prime Minister Narendra Modi, Congress President Rahul Gandhi on Saturday said PM Modi does not utter a word in support of the oppressed.

“All across the country, Dalits, Aadivasis and minorities are oppressed, women are gangraped, but, PM Modi does not utter a word in support of the oppressed,” Gandhi said while addressing a gathering of party workers and leaders in Rajasthan’s Jaipur.

“Narendra Modi is the Prime Minister of India. His duty is to protect women, farmers, MSMEs, but he doesn’t,” he added.

Highlighting the growing incidents of crimes against women, the Congress Chief said that PM Modi said ‘Beti Bachao Beti Padhao’ but he didn’t tell who to protect them from.

“In UP, a BJP MLA rapes a woman. Instead of protecting the woman, BJP govt supports rapists,” he said.

Raising the issue of farmers’ debts, the Gandhi scion said while the BJP government could waive off loans of their capitalist friends, they didn’t do anything about farm loan waiver.

“In the last 2 years, Modi govt waived loans worth ₹2,00,000 crore of only 15 businessmen. I asked for loan waivers for farmers, too. But his response was silence,” Gandhi said.

The Gandhi scion hit out at the government over the Rafale scam and questioned as to why was the contract of manufacturing contracts was taken away from Hindustan Aeronautics Limited (HAL) and handed over to a company which had a debt of ₹45,000 crore and had no prior experience of manufacturing aircrafts.

“When I raised the issue of Rafale scam and corruption in Parliament, PM Modi did not even spare a minute to answer my questions. The UPA government had given the Rafale deal to HAL. When PM Modi visited France, he took Reliance’s Anil Ambani with him and gave him the deal, despite the latter having no experience in defence sector. Anil Ambani’s company was formed just a week before the deal and PM Modi personally handed the deal to Reliance. The price of Rafale aircraft was increased by 3 times. Anil Ambani has a debt of ₹45000Cr. Defence Minister Manohar Parrikar himself admitted to not having any knowledge of the change in deal,” the Gandhi scion said.

Gandhi further said that when they come to power in 2019, they will remove the five-slab structure of GST and will introduce one-slab structure, and will also include diesel and petrol under GST which would reduce inflation.

While concluding his speech, Gandhi said that the Rajasthan elections will be won by the efforts and blessings of the party workers and their voice will be heard.

“I want to give my best wishes to Congress workers who are working at the grassroots. This election in Rajasthan will be won by the efforts and blessings of these workers and their voice will be heard,” he said.