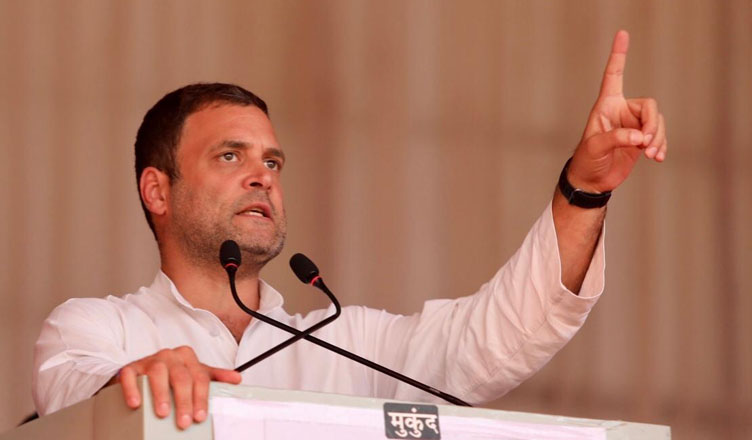 While addressing a rally in Raipur, Chhattisgarh, Congress president Rahul Gandhi on Monday said that the whole of Chhattisgarh knows the amount of corruption that took place in the state in the last 15 years and promised that the Congress government will work for people and their benefits.

Gandhi further said that Chhattigarh Chief Minister Raman Singh’s son’s name appeared in Panama Papers, yet no action was taken against him.

“The Congress government will be standing with you at every step in Chhattisgarh. A food processing plant will be set up in every district. You will sell your produce at the right price and the youth of Chhattisgarh will get employment,” Gandhi assured.

“Healthcare and education is expensive and unaffordable in Chhattisgarh. Congress govt will build and promote high quality govt hospitals and universities,” he added.

Terming Prime Minister Narendra Modi as the ‘chowkidar’ of Anil Ambani, the Congress chief said that the former snatched the Rafale contract from HAL, which has 70+ years of experience, and gave it to his ‘friend’ Ambani.

“Our Armed Forces give their life to protect this country. Thr UPA govt issued a contract to purchase 126 Rafale aircrafts. This contract was given to HAL, which has 70+ years of experience. This would provide for jobs in India. Mr. Modi takes away the deal from HAL and gives it to his friend Anil Ambani, who does not even have the experience of manufacturing a paper plane. The price of the aircraft is increased from ₹526 crore/aircraft to ₹1600 crore/aircraft,” he said.

“Mehul Choksi who stole ₹35,000 crore people’s money, deposited ₹24 lakh to Arun Jaitley’s daughter’s bank account. I appeal to every Congress worker to spread this truth to the people of Chhattisgarh,” he said.

Also read: Under Modi regime, Ganga river is more polluted than ever

Asserting that the press is suppressed and threatened to stop reporting against the government, Gandhi quoted the example of the reporter who was removed from his job for exposing the government.

“PM Modi has an interaction with a woman from Chhattisgarh where she agrees that her income is doubled. She later admits that she was told to say so. The reporter who reported this was removed from his job,” he said.

“The job of media is to inform people. FM Arun Jaitley’s daughter received money from Mehul Choksi, who fled the country with people’s money. Why isn’t the media doing its job?” he added.

Gandhi later assured that unlike PM Modi, who could waive off loans of ₹3,50,000 crore of India’s 15 richest but not of farmers, the Congress government will waive off farm loans within 10 days of forming the government.

“If Mr. Modi can waive off loans of ₹3,50,000Cr of India’s 15 richest, then why can’t he do the same for farmers? We had promised farmers of Punjab and Karnataka to waive off farm loans and we did it. I will not make false farmers. Congress party will waive off farm loans in 10 days of forming the govt. This is not a gift, we owe this to farmers’ hard work,” he said.

The polling in Chhattisgarh will be held in two phases, with the first phase taking place on November 12 and the second on November 20.