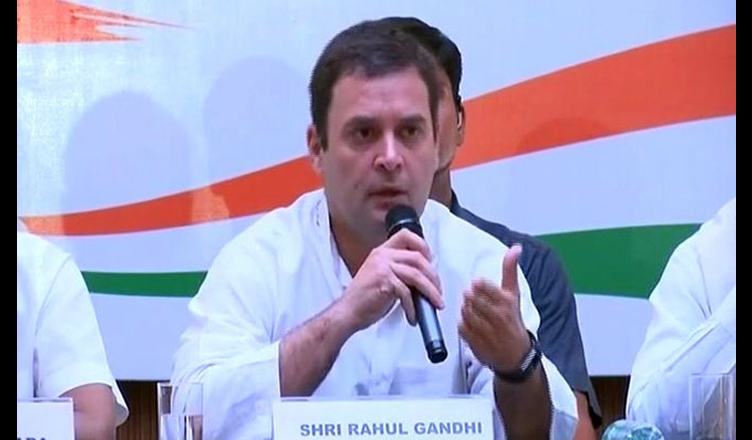 Congress president Rahul Gandhi on Thursday attacked Prime Minister Narendra Modi over a sting video that surfaced on social media showing BJP candidate B Sriramalu boasting about bribing the then Chief Justice of India (CJI) in 2010 with a sum of over ₹100 crore to give a favourable order to a mining company owned by G. Janardhan Reddy.

This is how Modi & Yeddy are getting "Reddy" to loot Karnataka. Fortunately, the people of Karnataka will not let that happen.https://t.co/H3jzrljRvz

The sting videos released in Bengaluru showed conversations between present BJP candidate from Molakalmuru and Badami and sitting Ballari MP B Sriramalu and former CJI Balakrishna’s son-in-law Sriranjan and Janardhan Reddy, Capt Reddy and ‘Swamiji’ among others about a sum of over ₹100 crore given as bribe to give a favourable order to a mining company owned by G. Janardhan Reddy.

The Congress has also filed a complaint with the Election Commission of India. It has requested the EC to direct immediate disqualification of Sriramulu & direct CEO Karnataka to lift injunction on Kanadda TV channels from showing the tapes.

At a press conference in Bengaluru on May 10, Karnataka Congress leaders recalled that in November, 2009 the Government of Andhra Pradesh issued an order prohibiting illegal mining by Obalapuram Mining Company owned by Janardhan Reddy. In February 2010, a Division Bench of the High Court of Andhra Pradesh, quashed the govt order and allowed mining operations by OMC.

Anticipating that the Govt of Andhra Pradesh would challenge the High Court order in Supreme Court through a Special Leave Petition, a communication was exchanged by OMC in order to dismiss the SLP stating that Supreme Court should not interfere in state matters, said Congress.

This was followed by a hearing in the Supreme Court on 11.03.2010, where the govt of Andhra Pradesh filed its SLP. The Supreme Court ordered a survey to determine the extent of the claims and in the meanwhile issued the maintenance of status-quo. The survey’s interim report, on 09.04.2010 recommended that mining be stopped entirely in light of grave irregularities, said Congress.

However, on 10.05.2010 the Supreme Court gave a favourable judgement and allowed OMC to continue its mining operations. CJI Balakrishna retired the next day, on 11.05.2010.