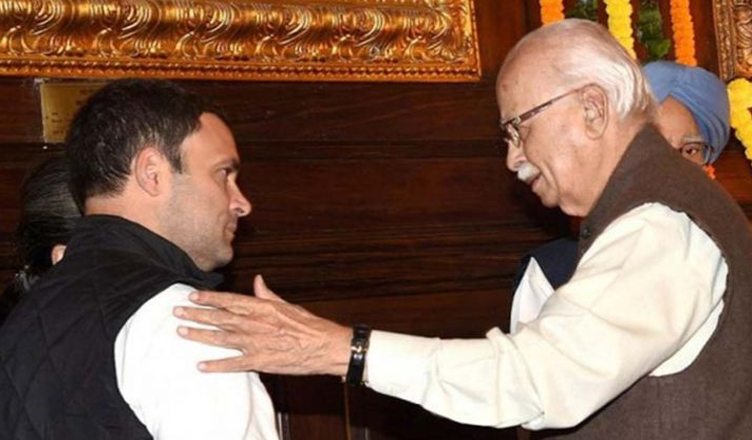 Knowing the kind of respect Congress President Rahul Gandhi holds for his elders, be it anybody, such a gesture was expected from him. The Lok Sabha on Monday witnessed an exchange of pleasantries between the Congress President and Bharatiya Janata Party (BJP) veteran L.K. Advani.

According to the Times of India, Rahul reached the Lok Sabha 10 minutes before the House was scheduled to start. When he saw Advani seated alone in the front row of the treasury benches, the Congress President went straight to the BJP veteran and asked his well-being.

Rahul asked Advani his well-being with folded hands. Advani responded: “I am fine, but the House is not.” The BJP veteran further expressed his concern about the House not being able to function. He also observed that it was the first time he was seeing neither the opposition nor the Speaker or Prime Minister, being able to end the impasse.

Rahul Gandhi returned to his seat at the other end of the House after talking to the former deputy prime minister for a few minutes.

However, this is not the first time that Gandhi has extended his courtesies to Advani. Earlier in January, the Congress President had held Advani’s hand to help him to his place at a function to commemorate the 16th anniversary of the attack on Parliament. He has also walked across the House to speak to him in the past.

Rahul Gandhi is one such leader who openly owns up his mistakes, never exaggerates about his doings and does not believe in taking credit. He is as humble as his family and is rightfully carrying the legacy of the generosity of his family.