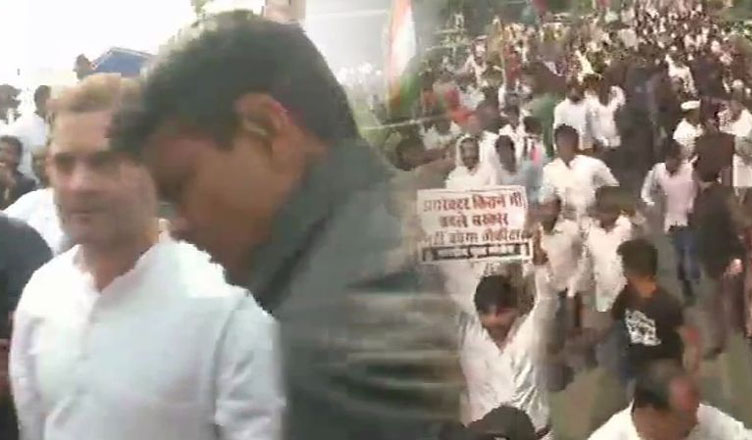 Congress President Rahul Gandhi on Friday led a protest outside the Central Bureau of Investigation (CBI) headquarters in New Delhi. In a tweet, Gandhi urged people to join them in protesting against the Prime Minister Narendra Modi’s “disgraceful and unconstitutional attempt to block an investigation into the Rafale scam by removing the CBI Chief.”

Since there is heavy security outside the CBI headquarters and proper barricading has been done, Rahul Gandhi, in his own unique way, decided to sit on the barricades itself and continue protesting.

The party is protesting outside all the CBI offices across the country.

“Join us today at 11 AM as we march from Dayal Singh College on Lodhi Road to the CBI HQ, to protest the PM’s disgraceful & unconstitutional attempt to block an investigation into the Rafale scam by removing the CBI Chief. Similar protests are being held today, across India,” Gandhi tweeted.

Even the Trinamool Congress (TMC) is likely to join Gandhi outside the CBI HQ.

In Chandigarh, police used water cannon at Congress workers who were protesting against the removal of CBI Director Alok Verma.

While addressing the media at a special press conference yesterday, Gandhi said that the removal of CBI Director Verma was “unconstitutional and illegal.”

“Removal and appointment of CBI Director is decided by 3 member committee- PM, CJI and Leader of Opposition. The CBI Director was removed by Prime Minister in the middle of the night. Apart from being an insult to the people of India, it is unconstitutional and illegal,” he said.

He further alleged that the main reason for the removal of CBI Director at midnight was because the CBI was going to begin an investigation into the role of the PM in the Rafale scam and the corruption carried out by him.

“Not only was the CBI Director removed, his office too was sealed and incriminating documents were taken,” he said.

In a letter written to Prime Minister Narendra Modi by Leader of the Congress in Lok Sabha and a member of the committee that appoints the Central Bureau of Investigation (CBI) chief, Mallikarjun Kharge, he said that “no one — neither you nor the CVC — enjoys the requisite authority to interfere with the Terms of Service vested in the Director” and that the move was “illegal” and “mala fide”.

“The actions taken in early hours of the morning of October 24, 2018, in transferring the Director and his entire team, amount to a grave violation of the law, the Supreme Court’s clear directions on the subject and the Constitution of India,” Kharge wrote in his letter.