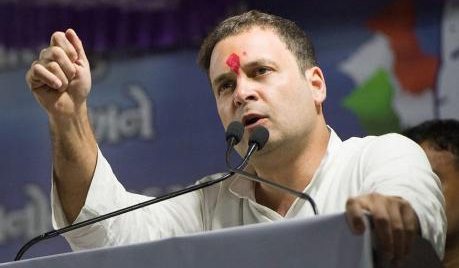 My happiness knows no bounds after seeing Rahul Gandhi being appointed as the Congress president. A day after his appointment, I would definitely want to tag Rahul Gandhi as the ‘Baahubali’ of Indian politics.

I remember back when I was in school, there was a bunch of 3-4 senior guys who used to bully me occasionally. I was intimidated by them and vowed to never rub them off in a wrong way. I couldn’t fight back those 3 kids then. Imagine how difficult it can be for someone to fight back a political party that in 2015 toppled the Communist Party of China to become the world’s largest party having a primary membership of 8.80 crores people. And fight back many others who swore their allegiance to the ideology of the BJP party and shunned down any voices raised against the party.

But Rahul Gandhi fought back.

There are troll machines devised just to ridicule the man, and not 100 trolls or 200 trolls but trolls ranging millions. To back them up there are BJP members who come on air and speak of Rahul Gandhi with disrespect. But as the saying goes, Tough Times Never Last, Tough People Do, Rahul Gandhi rose up to the occasion not with anger or aggression but with sheer humility and acknowledgement. He didn’t fire back the hatred of the BJP but dealt with them with compassion putting the entire BJP off guard.

A simple example being, off late eminent BJP leaders including the PM have vowed for a Congress Mukt Bharat (Wipe off Congress from India) and they have been very vocal about it. In retaliation Rahul Gandhi, in a rally attended by thousands, said, “Both the Congress and the BJP are expressions of people of India. And Indians respect such expressions. I subscribe to the ideology of the Congress. I will fight the BJP. But I will never wish to finish the BJP from India as it is expression of people of India”.

That was more than enough for the world media to take notice of this new Rahul Gandhi. BJP was shaken. The Congress party workers were infused with new energy, energy which is eminent at the rallies leading to the Gujarat Polls.

With Rahul Gandhi becoming the president of the Congress Party, we just wish him all the luck, and hope that the fire that he has reignited in the opposition burns the forces that are dividing the country. Today, while the youth is heavily misguided, Rahul Gandhi is trying to lead them to towards the right path with lot of compassion in his heart. In the end I would like to quote Mahatma Gandhi, a quote which contextualizes Rahul Gandhi’s rise vey symbolically “First they ignore you, then they laugh at you, then they fight you, then you win”.