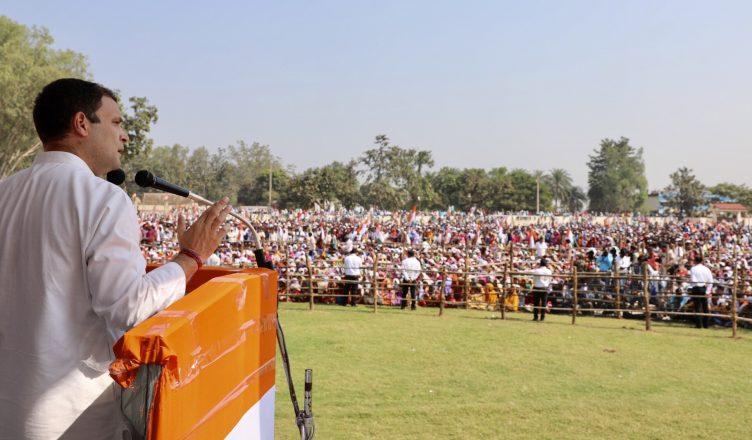 A day after the second anniversary of Demonetisation, Congress president Rahul Gandhi on Friday launched a scathing attack on Prime Minister Narendra Modi and said that if the note ban was announced to fight black money then why were there no hoarders of black money found standing in queues during that time.

“If Demonetisation was a fight against black money, then, while millions of people stood in queues, did anyone notice the black money hoarders in queues?” Gandhi said while addressing a public gathering in Rajnandgaon, Chhattisgarh.

“Not only did Mr. Modi not give Rs. 15 lakh like he promised, he made the whole country stand in queues during Demonetisation and forced them to deposit their money in banks,” Gandhi added.

Hitting out at Chhattisgarh Chief Minister Raman Singh over corruption, the Congress president said that the ‘chowkidar’ himself is a thief.

“For the last 15 years, Raman Singh govt is in Chhattisgarh and Modi govt for last 4.5 years in Centre both had promised jobs to youth and security to farmers, but failed to deliver. Mr. Modi promised to fight against corruption, right MSP to farmers, but now he doesn’t even mention them in his speeches because the ‘chowkidar’ himself is a thief,” he said.

He further said that the BJP implemented the Gabbar Singh Tax and not the real GST (Goods and Services Tax) because their aim was to loot money of poor traders.

“The loss done by PM Modi through Demonetisation and GST is the maximum loss ever seen in the history. The aim was to loot your money,” Gandhi said.

“If our government comes, we will bring in a single tax and which would be minimum,” he added.

“CM Raman Singh and PM Modi promised jobs, but today nearly 60,000 teacher posts, 13,000 lecturer posts are vacant & 3000 Aadivasi schools were shut down. We will ensure that the govt vacancies are filled up,” the Gandhi scion said.

The Congress chief promised that their government will provide minimum support price (MSP) of Rs. 2500 to farmers, bonus as well as waive off their loans.

“Chhattisgarh is not poor. It does not lack money. The farmers of Chhattisgarh will get MSP of Rs. 2500 to farmers. Raman Singh ji and Modi ji snatched bonuses from farmers. The Congress party government will give bonus to farmers; Not only this, the bonus not given by the Raman Singh government for the last two years will also be given by the Congress party,” he said.

Rahul Gandhi, who is on a two-day visit to Chhattisgarh, will be addressing another public gathering later in the evening today.