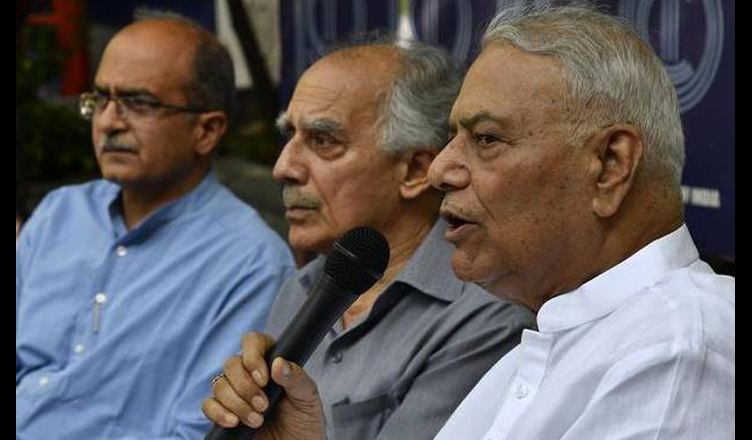 Former Union ministers Yashwant Sinha and Arun Shourie along with activist-lawyer Prashant Bhushan on Wednesday trained their guns on Modi Government over the ₹58,000 crore deal with France for 36 Rafale fighter jets signed in 2016, and termed it as the “biggest defence scam ever”.

They further accused the Bharatiya Janata Party (BJP) of “compromising national security” and said the Rafale deal was a “textbook case of criminal misconduct” by the government.

“The IAF required 126 aircraft. They would be getting 36 only by 2022. If this does not compromise national interest and security, what does?” Shourie said.

Bhushan, Shourie and Sinha said the total price of 36 aircraft is about ₹60,000 crore, which works out to be ₹1,660 crore per plane. For reference, the quoted a February 16, 2017 press release by French manufacturer Dassault Aviation and Reliance Defence, and a financial press release statement of Dassault for 2016.

“This is more than double the price of the aircraft under the original 126 Medium Multi-Role Combat Aircraft (MMRCA) and almost ₹1,000 crore higher per aircraft than the price furnished by the government itself, to Parliament on November 18, 2016,” the three said in a joint press statement.

While speaking in Parliament on July 20, the Congress chief hit out at the government over the Rafale scam and said, “In the Rafale deal, the government and the Defence Minister refused to disclose the price of Rafale jets claiming secrecy pact with the France Government. But the President of France has denied this. Defence Minister has clearly spoke untruth. The fact of the matter is there is no secret pact between the Indian government and French Government.”

He further questioned the government over snatching the deal from HAL and Karnataka youth and instead giving it to a businessman, who had not built a single airplane in his life and had a debt of ₹35,000 crore.

Shourie also urged the opposition parties to raise the issue in the “same manner as the BJP had raised Bofors, which pales into insignificance when compared to the Rafale scandal”.