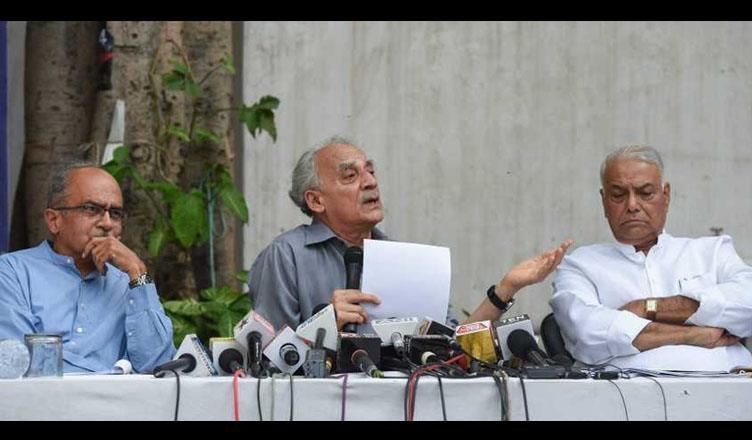 Former Bharatiya Janata Party (BJP) ministers Arun Shourie and Yashwant Sinha hit out at Prime Minister Narendra Modi once again over the Rafale deal and said that he was “personally culpable” for all that transpired and that he “compromised national security.”

The duo along with lawyer Prashant Bhushan jointly addressed the media at the Press Club of India (PCI).

Bhushan also accused the government of using “serving officers to tell lies in order to defend the Rafale deal.”

“National security has been compromised by the Prime Minister and every rule of the defence procurement flouted to unilaterally reduce the number of planes from 126 to 36. As per DPP (defence procurement procedure), only the Service headquarters can decide on the numbers,” Shourie said.

“Every explanation they put out ensnares the government in the web of lies they have spun. This means they have a lot to hide,” he added.

In an earlier press conference, held on August 3, the three had termed the Rafale deal as the “biggest defence scam ever” and had accused the BJP of “compromising national security.”

They said the Rafale deal was a “textbook case of criminal misconduct” by the government.

“The IAF required 126 aircraft. They would be getting 36 only by 2022. If this does not compromise national interest and security, what does?” Shourie had said.

Bhushan, Shourie and Sinha said the total price of 36 aircraft is about ₹60,000 crore, which works out to be ₹1,660 crore per plane. For reference, the quoted a February 16, 2017 press release by French manufacturer Dassault Aviation and Reliance Defence, and a financial press release statement of Dassault for 2016.

“This is more than double the price of the aircraft under the original 126 Medium Multi-Role Combat Aircraft (MMRCA) and almost ₹1,000 crore higher per aircraft than the price furnished by the government itself, to Parliament on November 18, 2016,” the three had said.

Shourie had also urged the opposition parties to raise the issue in the “same manner as the BJP had raised Bofors, which pales into insignificance when compared to the Rafale scandal”.