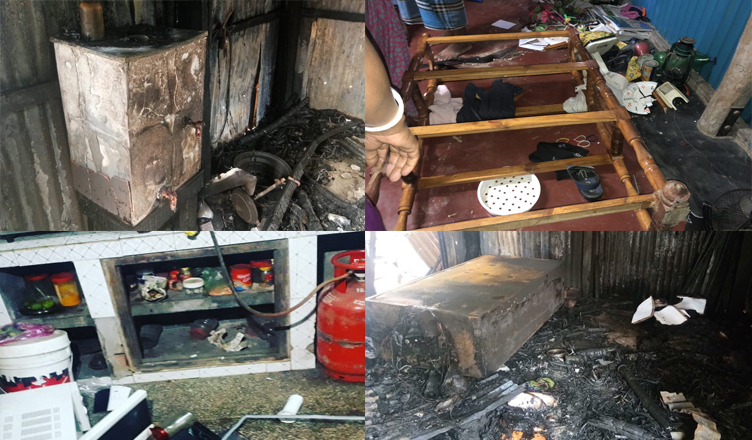 After the results of the Lok Sabha election were announced on May 23, the state of Tripura witnessed massive violence with people being attacked and their properties such as houses, shops being vandalised.

As reported by Scroll on May 31, three people died in what has been claimed by the local press as the consequences of political rivalry.

One can imagine the kind of violence unleashed by the pictures posted by people on social media.

“Congress office in Pratapgarh before and after elections. Kindly ensure thugs in the garb of political cover stop doing this. We will rebuild our office but can Tripura rebuild its image which has been lost to the culture of election violence? The same happened under left?” he wrote in a tweet on Thursday.

Congress office in Pratapgarh before and after elections. Kindly ensure thugs in the garb of political cover stop doing this . We will rebuild our office but can Tripura rebuild its image which has been lost to the culture of election violence? The same happened under left ? pic.twitter.com/hVCGomY1TW

Tripura Congress’ official Twitter handle also posted many incidents of attacks being made on the party workers in the state and condemned these acts of violence.

The attack on block congress president of Bishalgarh is deplorable and cowardly. We condemn any act of violence and appeal to the people to maintain the democratic spirit of elections. pic.twitter.com/eh8nAr9HRZ

Some other tweets depicting the extent of violence:

Visited Teliamura and met workers affected after the post poll violence. As the president @INCTripura i have assured all help to the victims as well as some compensation from our side,also met the police officials .We are on the ground and will not abandon our workers . pic.twitter.com/rwqOjzeVOj

Went to MungiaKami and discussed the violence and extortion threats to the villagers.Certain lobbies are also trying to take over the market there. I have given some relief to the villagers and met the police to provide safety for the people .We will also ensure bail 4 all pic.twitter.com/4IdSIJSsEm

Mass scale post poll violence at Brindabanghat. Yesterday I accompanied TPCC Hon’ble President Shri @PradyotManikya ji to the spot where he has given 50k rupees to the victim family for immediate relief and also urged the police to apprehend the criminals immediately @Allavaru pic.twitter.com/eS178o3qYu

Extortion money demand with a threatening letter were dropped in the houses of some local people of south chandrapur (Srilanka Basti) Booth No 9/25, under 9. Banamalipur assembly in the name of BJP local leaders today morning. (2/1)@INCIndia @RahulGandhi @PradyotManikya pic.twitter.com/bsN0mPh2HO

One of such letter is also found in the residence of a Mahila congress worker of the above mentioned area. An FIR was filed at East Agartala PS today agaist such threat and demand of money. (2/2)@RahulGandhi @priyankagandhi @PradyotManikya @sushmitadevmp pic.twitter.com/NZhXgaYrKi

The opposition has blamed the BJP for unleashing mayhem in the state. They have alleged that the BJP workers are settling their personal scores in the name of victory and under the protection of the police.

“They were criminal elements who were with the communists and were inducted into the BJP. Now, in the name of victory, and under the protection of the police, they are settling personal scores. Around 300 of our workers have been hospitalised, 250 homes and 100 shops of our supporters burnt,” Scroll quoted Debbarman as saying.

The Congress Party understands the trouble their workers are facing in the state and feel their pain.

Due to the same reason, the state Congress is going to appeal to the Supreme Court to get compensation for all of the victims of the post-poll violence in Tripura.

@INCTripura is moving to Hon'ble SC to get compensation for all of the post poll victims in Tripura who were get attacked by the BJP goons, hear it full from @PradyotManikya pic.twitter.com/L3QqLThM9t

Not just this, the Congress has also initiated a crisis fund for the aid of its injured workers.

Congress stands in solidarity with its workers attacked in post-poll violence in Tripura by BJP workers. They were beaten, homes & shops torched & family members threatened.
We request you to support by making a contribution.
Contribute Now- https://t.co/DCqBWxelM9 pic.twitter.com/4Q9Tirruws