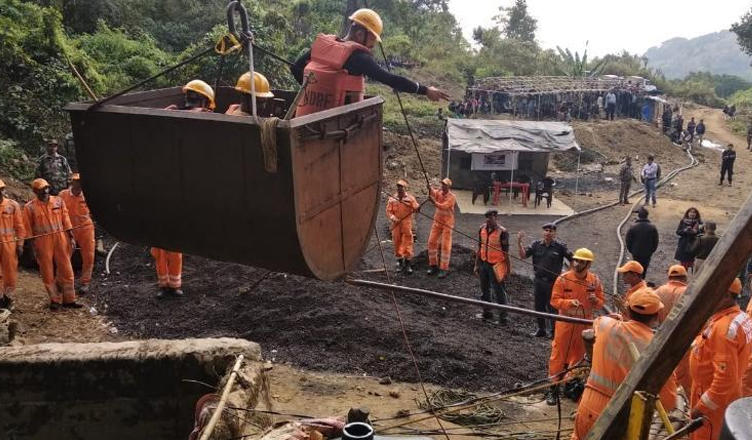 Criticising Prime Minister Narendra Modi for ignoring the plight of 15 miners who are trapped in a coal mine in Meghalaya for two weeks, Congress President Rahul Gandhi requested the former to save the miners.

Taking to Twitter, Gandhi wrote that while the Prime Minister is busy getting himself clicked on Bogibeel Bridge (PM Modi inaugurated the longest railroad bridge yesterday), 15 people are struggling for air in a flooded coal mine in Meghalaya.

“15 miners have been struggling for air in a flooded coal mine for two weeks. Meanwhile, PM struts about on Bogibeel Bridge posing for cameras. His government refuses to organise high pressure pumps for the rescue. PM please save the miners,” Gandhi tweeted.

15 miners have been struggling for air in a flooded coal mine for two weeks.

Meanwhile, PM struts about on Bogibeel Bridge posing for cameras.

His government refuses to organise high pressure pumps for the rescue.

PM please save the miners. https://t.co/STZS62vTp4

The rescue operation carried out by the National Disaster Response Force (NDRF) was put on halt yesterday due to lack of effective equipment.

According to Scroll, the NDRF team needs high-power pumps, the request for which is pending since eight days.

The request for high-power pumps was made on December 16 and it is pending since then.

“All the experts and experienced people are of the view that we would be requiring at least 10 pumps of 100 horsepower each to pump out the water,” Scroll quoted SK Shastri, the commandant of the battalion leading the operation, as saying.

Currently, the rescue team has two pumps of 25 horsepower for its use.

15 miners got trapped in a 370-feet illegal coal mine in East Jaintia Hills district on December 13 after a nearby river flooded it.

The mine is filled with 70 feet of water and the rescue team is waiting for the water to recede to 30 feet in order to enable divers to their job.

But the unfortunate part is that water from the river is continuously seeping into the mine.

“These two things have to happen simultaneously for us to have any sort of chance – the water has to be pumped out and the source cut off. Because even if a diver manages to reach the bottom of the shaft, he can’t enter the lateral mines if the water is not completely pumped out,” Shastri said while pointing out the urgent need of high-power pumps.

One thought on “PM posing for cameras while 15 miners struggle for their lives: Rahul Gandhi”