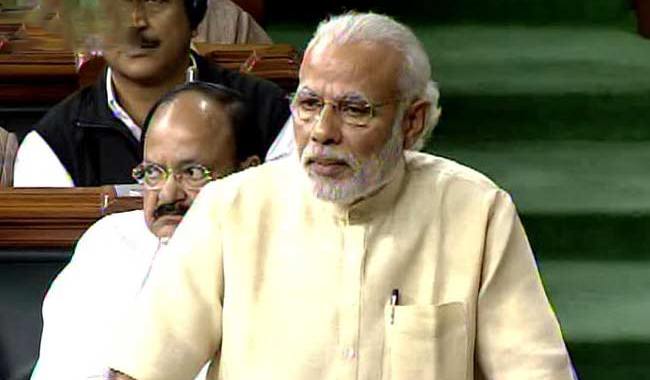 Prime Minister Narendra Modi replied to the motion of thanks on the President’s address yesterday.

He spoke in a way where he forgot about the dignity of Parliament, and the language used by him was also not dignified.

In a speech which lasted for almost 90 minutes, the PM attacked previous governments one by one, and the focus of his attacks was the Congress and the UPA governments.

In the beginning, he said, “The President’s address is not any party specific and it should be respected.” He is absolutely correct, but at the same time, he forgot that he is the PM of the country, and not of a political party.

While attacking the Congress, he completely forgot that he is addressing the Lok Sabha and not a public rally.

He said, “I can understand that you talk about [past] 70 years. But, today the BJP rules the country. The NDA government rules the county. Perhaps Modi ji has forgotten that he is the Prime Minister of the country, not the leader of the opposition”.

He was so keen to attack the Opposition, that he forgot that the place where he was delivering his speech was the same place where India’s first prime minister Pandit Jawaharla Nehru gave the message of democratic values to the world.

He called pre-independent India democratic and said Congress had no contribution towards the same. Perhaps, he was referring to the time when the founders of RSS and Hindu Mahasabha, had betrayed the country by supporting the Britishers and had even submitted written apologies to them.

While downplaying Nehru’s contribution in making India, PM Modi forgot that when he took oath of the office in May 2014 and promised to uphold and protect the Constitution, that Constitution was created during the tenure of Jawaharlal Nehru and it is the same Constitution under which India has become the largest democracy of the world.

Also, as per the norms, the one speaking is supposed to address the Speaker and chair of the house. However, PM Modi conveniently forgot about it and taking the good orator that he is, he addressed people there as “bhaiyo, beheno.”

In the entire speech Prime Minister Modi was seen displaying his verbosity and eloquence. But facts were missing from his speech. The restlessness and anxiety of the prime minister was quite apparent from his body language and he went on to say that the Congress did not have a vision or farsightedness.

He mentioned former prime minister Atal Bihari Vajpayee in this context. But he forgot that if the Congress did not have a vision for this country, then we would have had neither prestigious educational institutions like IITs and IIMs, nor the strong infrastructure, roads and railways.

On Kashmir issue, Prime Minister Modi mentioned Sardar Patel and said, “Had Sardar Patel been our first prime minister, the entire Kashmir would be ours.” But he forgot how the conditions in Kashmir have worsened during his tenure.

There have never been as many incidents of cease fire violations as have taken place in last three-and-a-half years.

This shows PM Modi in a poor light. Not only has he disgraced the Parliament but he has also put to shame the office of the Prime Minister.