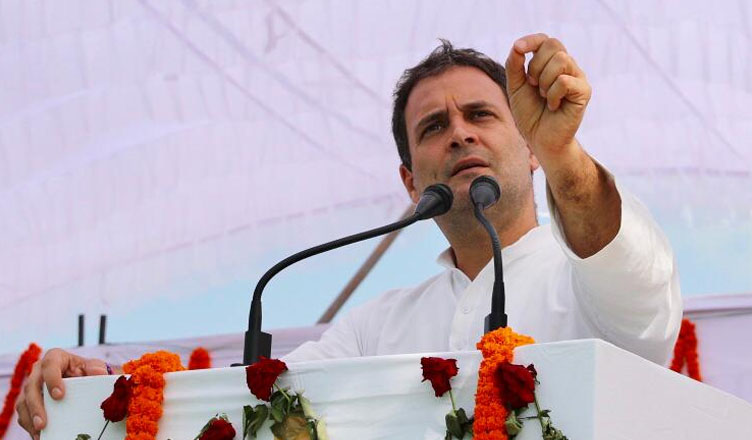 Hitting out at Prime Minister Narendra Modi, Congress President Rahul Gandhi on Friday said that youth of the country has understood that the intentions of the former are not clean.

“One who steals cannot look in the eye and talk. The youth of the country has understood that Modi ji only makes false promises from stage and that his intentions are not clear,” Congress Chief Rahul Gandhi said while addressing a press conference in Madhya Pradesh’s Rewa.

The Congress Chief further said that PM Modi’s policies only help 15-20 of his friends.

“Narendra Modi came to power, changed the (Rafale) deal and gave it to Anil Ambani. He took public money and filled pockets of his friend Anil Ambani, who owes Rs. 45,000 crore to banks,” he said.

He further said that PM  Modi himself waived off debt of Rs. 1,50,000 crore of entrepreneurs but he would not waive even a single rupee of Indian farmers.

“From this stage, I challenge the Prime Minister of India – Narendra Modi Ji to answer my questions,” he said.

Raising issue related to the Land Acquisition Bill, Gandhi highlighted how the BJP government ensured that farmers selling out their land to government do not get their proper due.

“The UPA government introduced the Land Acquisition bill, the bill to protect farmers’ lands. The bill clearly mentioned that if the land is taken from the farmer, his permission would be taken and that he would four times the market price,” he said.

“Narendra Modi tried to end the bill in the Lok Sabha and that too, thrice. But, the Congress Party stood against it and said “we won’t let you do it.” Then Narendra Modi asked Shivraj Singh Chouhan to end it in Madhya Pradesh. And today, when a land is snatched from the farmer in the state, he is given only two times the market price instead of four times,” he added.

Gandhi asserted that if the Congress comes to power, farmers will be paid four times the market price for their land.

Rahul Gandhi, who is on a two-day visit to Madhya Pradesh, will be addressing a corner meeting at Chunari later in the evening today.

Earlier, he held corner meetings at Baikunthpur and Lalgaon.