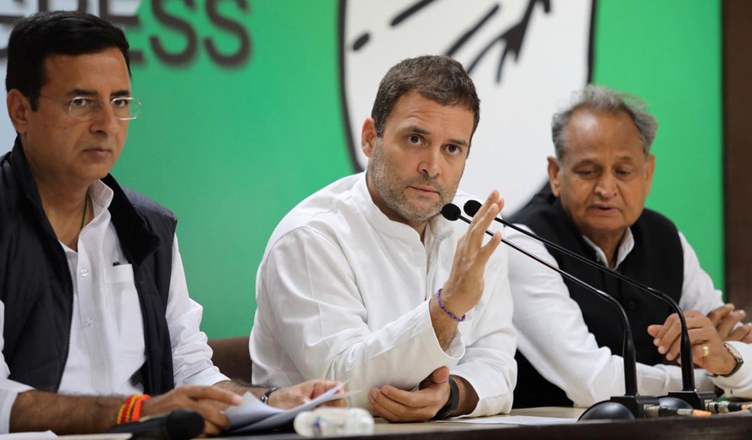 Congress President Rahul Gandhi on Friday launched a scathing attack on Prime Minister Narendra Modi and said that if an inquiry is initiated into the Rafale deal then the latter would not be able to survive it.

In an exclusive report by The Wire which states that Dassault Aviation invested Rs. 284 crore in Anil Ambani’s company, Reliance Airport Developers Limited, by buying its 24,83,923 shares. In the year ending March 2016, this company earned no revenues and recorded losses of Rs. 9 lakh. In the year ending March 2017, the company earned revenues of Rs. 6 lakh and recorded losses of Rs 10.35 lakh. Why would a company like Dassault invest in a firm which has almost zero revenue and is only posting losses?

What is more? The same Rs. 284 crore was used by Reliance to buy land for the manufacturing of Rafale jets. This makes the controversy more murkier. Because Dassault had earlier claimed that they entered into a joint venture with Reliance because it had land but now it turns out that the same money paid by Dassault to Reliance was used by the latter to purchase the land.

Raising the same questions, the Congress chief said that Rafale is an open and shut case.

“There is a partnership between two people, Modi and Anil Ambani. Rs. 284 crore were given to company which has a word of Rs. 8,30,000. What is the logic? And then that money has been used to buy the land. Dassault CEO is said they gave contract because Anil Ambani had land, but you (Dassault) only bought the land. So there is some other reason,” he said while addressing a press conference in New Delhi.

He further said that Rs. 284 crore is one of the many tranches of money that Dassault has paid in kickbacks.

He then said that Dassault CEO is trying to protect the man who runs the country i.e. Mr. Narendra Modi.

“Anil Ambani was given the contract because he had the land. Now it turns out, the land he had was purchased from the money he got from Dassault. And for some reason, which is hard to understand, Dassault gave Rs. 284 crore to a loss making company. Why is the Dassault CEO lying. Whom is he protecting. He is protecting the man who runs this country, Mr Narendra Modi,” Gandhi alleged.

Rahul Gandhi narrated his conversation with French President Emmanuel Macron and said that no where did he say that pricing was a part of the secret pact.

“I met Mr. Macron and I categorically asked him that public money is used to buy jets and so the price should be told to the public. In response, Macron said price is not there in the secret pact. Price cannot be a part of secret agreement,” he said.

“The Government of India says that pricing is top secret but Dassault annual report has the pricing in it and it shows exactly how much the Indian government paid,” he added.

The Gandhi scion further asserted that there is only one person who took the entire decision and he is Mr. Modi. He said the Prime Minister did not even do CCS (Cabinet Committee on Security) meeting, which is done before any deal is finalised.

He further said that had the Prime Minister not been involved, he would have asked for an inquiry.

“If an inquiry takes places, Mr. Modi will not survive this. Because it is a case of corruption and second, everybody knows who took the decision. It was a deal done by Modi to give Anil Ambani Rs. 30,000 crore,” he said.

The Congress Chief also raised the matter of ouster of CBI Director Alok Verma. He alleged that he was removed because he was planning to initiate an inquiry into the Rafale deal.

“CBI chief was removed and he was looking at these papers. There is enough material in public domain to nail Mr. Modi. There is cover up in the place. The CBI chief is privy to this. He has been removed because he has information of this type and he wants to start this inquiry. PM is scared of inquiry and that’s why he Director has been ousted,” he said.

“It is a clear cut case of corruption and it will be proven that PM and FM have stolen Rs. 30,000 crore of the country,” he added.