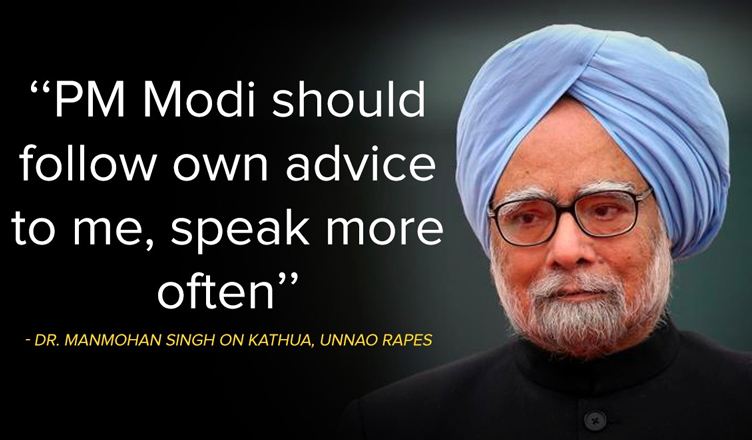 Hitting out at Prime Minister Narendra Modi for his prolonged silence over the rape of an eight-year-old girl in Jammu and Kashmir’s Kathua and alleged rape of a 16-year-old by a BJP MLA in Uttar Pradesh’s Unnao, former prime minister Manmohan Singh said that Modi “should follow his own advice to me” and “speak more often”.

However, the former prime minister said that he was glad that Prime Minister Modi finally broke his silence last Friday at an event commemorating the birth anniversary of Dr. B.R. Ambedkar, when he assured that the “daughters of India” and that the perpetrators of the crime would be punished.

Singh felt that because Prime Minister Modi did not come up with any statement soon after the incidents took place, it allowed people to think that they could get away with such crimes.

Manmohan Singh was often taunted by the BJP (then in opposition), and was called ‘Maun Mohan Singh’ on several occasions. However, the aura that he had as the prime minister is irreplaceable and unmatchable.

The former prime minister also reprimanded several BJP state governments for being unable to handle law and order, and failing miserably in ensuring women’s safety. He also expressed concern over the recent rise in hate crimes such as lynching of Muslims and baiting of Dalits.

“The BJP government at the Centre should send instructions to it state governments to ensure that law and order is properly enforced and minorities, Dalits, and women are treated properly,” he said.