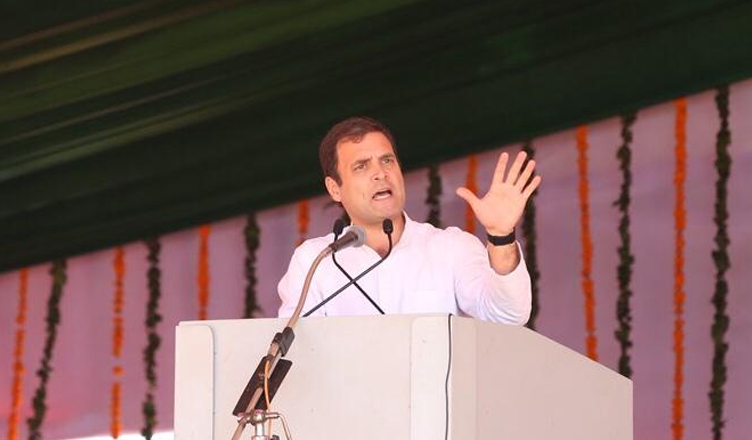 Reminding Prime Minister Narendra Modi that he is not the Prime Minister of the Bharatiya Janata Party (BJP) but that of India, Congress President Rahul Gandhi on Thursday said the former refused ₹21,000 crore to Punjab because there is a non-BJP government in the state.

He then took a swipe at PM Modi for helping entrepreneur Anil Ambani by giving him ₹30,000 crore in the Rafale deal.

“Mr. Modi is not the PM of BJP, he is the PM of India. Today CM Captain Amarinder told me that PM Modi has refused to give ₹21,000 crore that rightfully belongs to the state, because there is no BJP government in Punjab. However, Narendra Modi gives ₹30,000 crore to Anil Ambani by changing the Rafale contract and taking it away from public sector unit HAL (Hindustan Aeronautics Limited). What have people of Punjab done to deserve this injustice?” Gandhi asked while addressing a public meeting in Moga, Punjab.

Drawing comparison between the BJP and Congress, Gandhi said that while PM Modi failed to fulfil the numerous promises he made five years ago, the grand old party fulfilled its promise of waiving farm loans in Rajasthan, Madhya Pradesh and Chhattisgarh within 10 days of forming governments.

“Five years ago, when Mr. Modi became the Prime Minister, he made many promises like ₹15 lakh, solving farmers’ crisis, 2 crore jobs to youth etc, but failed to fulfill them. In the last 5 years, Narendra Modi waived off loans worth ₹3,50,000 crore of 15 big industrialists, but he has done nothing for farmers. We waived off farm loans in Madhya Pradesh, Rajasthan and Chhattisgarh like we promised. We did this in 10 days of forming the government,” he said.

Gandhi also attacked the Centre on various other issues such as demonetisation, Goods and Services Tax (GST).

“We warned Modi govt of consequences of multi-tax base GST and yet they implemented it without proper planning. It has harmed our businesses,” Gandhi added while assuring to reform the tax structure once they form the government.

“The backbone of drug mafia in Punjab was broken by Punjab government,” he said.

From Punjab, Rahul Gandhi will head to Himachal today itself, where he’ll address another public rally. The rally is to be held in Kangra.

One thought on “PM Modi refused ₹21,000 crore to Punjab as there is non-BJP govt: Rahul Gandhi”