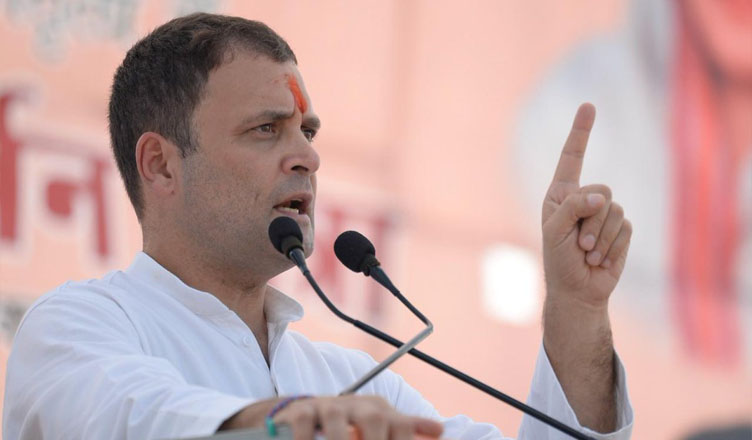 While addressing a gathering in Madhya Pradesh’s Darba, Congress Chief Rahul Gandhi on Monday asked if Prime Minister Narendra Modi fulfilled even one promise he made, whether it be about creating 2 crore jobs per year or reducing inflation.

“PM Modi is talking about jobs for the last 4 years. Promised to create 2 crore jobs. But has this promise been met by the Modi government and the Shivraj Chouhan government? Did inflation reduce? But Modiji had said so! Which promise has been fulfilled by Modi ji?” Gandhi asked.

Hitting out at the Centre over the rising fuel prices, the Congress President said that while global crude oil price is falling, the price of fuel in India is continuously rising.

“During the UPA govt, global crude oil price was $140/barrel. Now the price has decreased to $70/barrel. Then why is the price of fuel increasing in India? Who benefited from this? What kind of a magic is this? In whose pocket is this money going?” Gandhi taunted.

Reminding people of the one of the biggest scams, the Vyapam scam, the Gandhi scion called Madhya Pradesh Chief Minister ‘a master in corruption’.

“Shivraj Chauhan ji who is a master in corruption. The whole structure of education ruined. Shivraj ji and his family continued to do corruption. 50 witnesses were murdered in this (Vyapam) case. The entire Madhya Pradesh knows about what happened in Vyapam, e-tendering,” he said.

Drawing a stark contrast between the Congress government and the BJP government, Gandhi said that while BJP waives off loans worth ₹3,50,000 crore of 15-20 industrialists, we will waive off loans of farmers in Madhya Pradesh.

“BJP can waive off loans worth ₹3,50,000 crore of 15-20 industrialists, but when it comes to farmers, PM Modi says there is no money. UPA govt waived off ₹70,000 crore farm loans. I promised to waive off loans in Karnataka within 10 days of forming the govt, and we did it. We will do the same in Madhya Pradesh,” Gandhi promised.