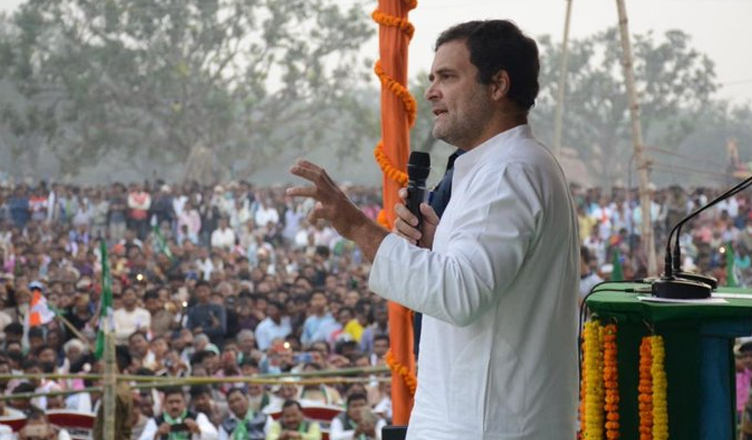 “If Modi is against corruption, then why does he stand with Raghubar Das? Because, Narendra Modi himself is the biggest symbol of corruption,” Gandhi said while addressing a public rally in Jharkhand’s Rajmahal.

Targeting the government on economic slowdown and increasing inflation, Gandhi said that except for Prime Minister Modi, the entire country knows what it is undergoing.

“Except for the Prime Minister, all of India knows that there is inflation. The Prime Minister does not know because he lives in a different world. Farmers, labourers, shopkeepers, unemployed youth, women are all sad, Adani is happy. Modi gives money to 15-20 industrialists of India. This money belongs to the people of India, it belongs to Jharkhand,” Gandhi said.

Reminding people of how Modi opposed the land acquisition bill in the past, the former Congress president said that it was their efforts to brought in such a bill under which land of tribals, farmers and the poor would not be taken without their consent and that they will be compensated at a rate that is four times the market price.

Also read: People in Assam can’t read your “reassuring” message as internet has been cut-off: Congress’ dig at PM Modi

“In Chhattisgarh, no land is being taken away from anyone. Instead, land has been taken back from the Tata company and given back to the farmers,” he said.

Gandhi further said that just like loans of the farmers of Chhattisgarh, Rajasthan and Madhya Pradesh were waived off within 15 days of Congress forming its government there, the loans of Jharkhand farmers will also be waived off.

“The loan of the farmers of Jharkhand will be waived as soon as our coalition government is formed and I do not lie. I do what I say. You should ask farmers in Rajasthan, Chhattisgarh, Madhya Pradesh,” he said.

Attacking the government further, Gandhi said that PM Modi gives money to only industrialists due to which there is unemployment.

“Today, India has the highest unemployment in 45 years. This is the work of Narendra Modi. If this government gives money to farmers and labourers instead of giving money to industrialists, then the economy will become stronger and unemployment will end,” he said.

“There is no shortage of money in Jharkhand but it is not coming in the public’s share. But, this money will start reaching you as soon as the Congress coalition government is formed,” he added.

One thought on “PM Modi himself is biggest symbol of corruption: Rahul Gandhi in Jharkhand”