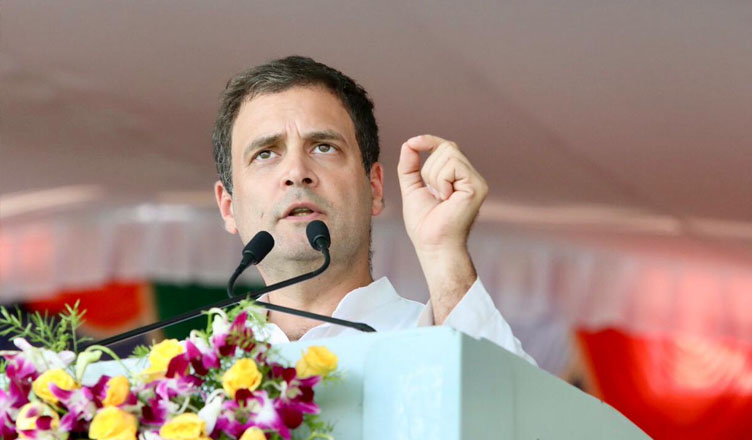 Congress President Rahul Gandhi on Tuesday hit out at Prime Minister Narendra Modi and said that the latter fights the ideas and values of the nation for which Mahatma Gandhi sacrificed his life.

“Mahatma Gandhi fought for truth all his life. When PM Modi promised ₹15 lakh in every account, promised 2 crore jobs every year, but it all turned out to be a lie,” he added.

The Congress Chief further said that in his 15th August speech, PM Modi said that nothing had happened in Indian before him becoming the Prime Minister, but by saying this he has insulted Mahatma Gandhi and the people of this country.

The Gandhi scion lashed out at the Modi Government for waiving loans of India’s richest but ignoring farmers’ grievances.

“In the last four years, Narendra Modi waived Rs. 3 lakh 20 thousand crore of India’s richest 15-20 rich people. The farmer of every state of India says to the prime minister and finance minister to forgive their debt, but the Prime Minister and the Finance Minister refuse to accept,” he said.

He then raised the ongoing Rafale controversy and questioned as to why did the government bought a jet, worth Rs. 526 crore, for Rs. 1,600 crore.

“Tell me one thing, why did you snatch the Rafale contract from Hindustan Aeronautics Limited (HAL) and give to your friend Anil Ambani?” he questioned.

Earlier in the day, the Gandhi scion convened the Congress Working Committee (CWC) meeting at the Sevagram ashram of Mahatma Gandhi in Maharashtra’s Wardha district.

The Congress Chief then attended a prayer meeting at Bapu Kutir in the ashram followed by garlanding of statue of Mahatma Gandhi, near the Collector’s office in the city.

Today’s CWC meeting was historic as the party’s working committee had held a meeting in Sevagram in 1942 to adopt the ‘Quit India’ resolution and that meeting was presided over by Mahatma Gandhi.

Earlier in the day, the Congress Chief paid tribute to Mahatma Gandhi at Rajghat in Delhi. UPA Chairperson Sonia Gandhi also paid floral tributes to the Father of the Nation.