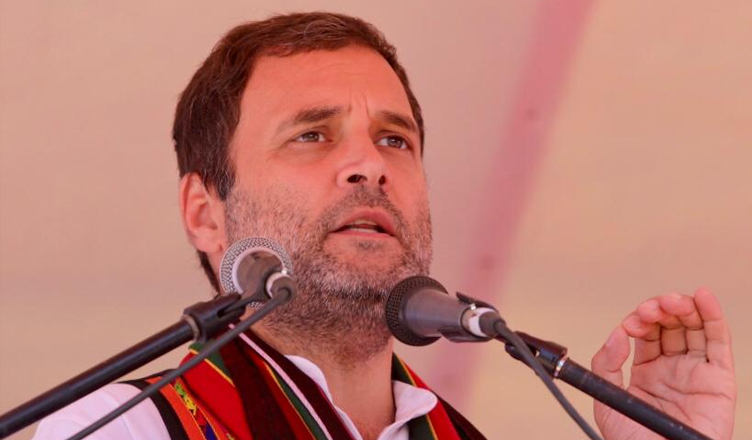 Congress president Rahul Gandhi on Tuesday took potshots at Prime Minister Narendra Modi and said that while the latter could give ₹30,000Cr to Anil Ambani in the Rafale scam, he could not give Mizoram what Mizoram is owed.

He further said that the money for advertisements of Bharatiya Janata Party (BJP) come through blatant corruption.

“How does PM Modi and BJP have the money to expand into North East? You always see PM on television and their ads on newspapers. The answer to this is blatant corruption,” Gandhi said while addressing a public meeting in Champhai, Mizoram.

“One instance of corruption is- Rafale deal, one of the biggest defence contracts in the world. When Mr. Modi becomes the PM, he increases the price of aircrafts and gives the deal to Anil Ambani,” he added.

He further said that there is an ideological fight taking place between the BJP-RSS and the Congress.

“The Congress party says that India should be ruled by its people and different cultures should be allowed to express themselves in the country. On the other side, BJP-RSS want to destroy the culture, language and expression and they do this by dividing communities. Mizo National Front(MNF) is opening the door for RSS ideology to enter the state,” he said.

He added by saying that Congress believes that different cultures and languages make India strong and that they will defend it.

Appreciating the work done by the Congress in the state, the Congress chief said he was happy to see that how Mizoram had moved from an era of violence to an era of peace and prosperity.

“In 2008, the per capita income was ₹57,000/year. Today, it is ₹1.15lakh. And it makes me proud to tell the people of Mizoram that this is 20% more than the national average. In last 5 years, agriculture & horticulture grew by 45%. Cultivation of pineapples increased by 900%. In Champhai, we have built a Champhai Horticulture College to educate people in garden cultivation and large scale crop production. Congress govt built the first Medical College and Research Centre in Mizoram,” he said.

“It was the visionary nature of the Mizo Accord, the bringing together of all the people of Mizoram, that made this possible. I’m happy to say that Congress govt under Mr. Lal Thanhawla has brought tremendous development,” he added.

While delivering his speech, the Gandhi scion remembered his father, Rajiv Gandhi’s visit to the state.

“Coming back to Mizoram brings back memories of my father’s visit here in 1987 when he toured the entire state by road and promised to rebuild the economy and a lasting peace for Mizoram,” he said.

Mizoram will go to polls on November 28.