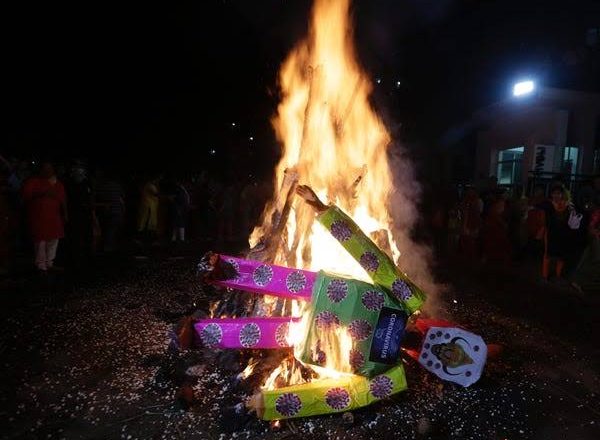 The fear hung heavy in the air. What’s he gonna say? Is he gonna announce doomsday? The doctors fighting this pandemic need PPE. Can that be provided? Lotsa questions on the people’s minds. There was lotsa anxiety to be allayed. Can he handle all of this?

On the ninth day of the lockdown, he appeared at 9 in the morning, in an altered state of consciousness to fire-up the comatose cabinet. He belongs to another reality far beyond our conscious world. It’s hard for rational thinking people to comprehend him. Only the Bartan Bangers can. A fortnight ago he called for the pathogen to be annihilated by a sonic bomb. And the Bartan Bangers clanged away at the evil.

But it didn’t help much. People were wondering how we’re gonna overcome the pandemic that knows no religion or national boundaries. Even a few Bikau Bartan Bangers began worrying about the future. They too wondered whether doctors will be provided with PPE. And Megalo announced another PPE—Pagal Praja Experiments.

This time Magalo said, “Bajao Bartan, Jalao Diya’. The Bartan Bangers went berserk. As the nation swift waltzed into a dark future, the Bartan Bangers will set fire to the schisms in society. As they perform the dance of death, under the flickering democracy, they would sing their new anthem:

And as the nation burns, the Bartan Bangers imagined that somewhere at a piedmont lake, Megalo will Tango with the Tadipaar. Bingo!

What more can be done to allay the anxieties of a billion people, innit?

“But Megalo ji, you gotta be a hero, not Nero”, suggested the rational man.

“I’m not Nero. How you can say that I am Nero? Nero played fiddle when Rome burned. Here I am doing the burning. You fellows will do the fiddling”, shot back Megalo.

“Of course, I am testing your patience”.

“Never mind!”, said the rational man, “I’ll go to the media and seek a public debate on the pandemic.

Megalo stopped his Tango. And laughed at the naiveté of the rational man, like he did in Japan during demonetization.

The poor rational man went to the TV studio. There, the nation’s most dreaded vocalizer, Cowswami scowled at him. Cowswami puts the cow in the national scowl. As people surf channels, Cowswami can be heard at least three channels away. The rational man waded through the sound waves as he entered the studio. Cowswami was livid at people asking for sanity.

“How dare you? People are banging Bartans and kicking buckets and you want sanity?” HOW DARE YOU HOW DARE HOW HOW HOW ARE YOU NOT A COW, HOW DARE HOW DARE…” Cowswami flared up at the man who allegedly asked for sanity. He threw some papers into the air and before they settled on the floor, Cowswami jumped over his desk and bit the man who allegedly dared to ask for sanity. Meanwhile, a pathogen perched in an inconspicuous corner couldn’t bare the cacophony.

“I gotta escape from this psycho-pathogen” it thought to itself and glided outta the studio and took shelter under a tree.

The rational man watched in horror and decided against going to the media. He tried to console the bitten man.

“You know him well, brother. The nation knows him. So why did you ask Cowswami for sanity?” enquired the frightened rational man.

“I didn’t brother. I was trying to ask for some sanitizer. And before I could complete the third syllable, Cowswami ran into a rage and got outta his cage…”

“Lemme take you to the hospital” offered the rational man.

“It’s ok brother. Let it be. The doctors are busy. Let’s not add to the work they’re doing in this pandemic”.

“Yes indeed. We must be thankful to the doctors. We must show gratitude by demanding PPE for them and better funding for healthcare…” mused the rational man.

“THAT’S NOT HOW YOU SHOW GRATITUDE! YOU BEAT PLATES, YOU BECOME A BARTAN BANGER”, flared the bitten man.

The bitten man chased the rational man around the studio. Somehow, he escaped and took shelter under a tree. There he heard a voice:

“Escape all this madness, my dear rational man. I’ll take you to my friend”, it said.

“Who’re you? And who’s the friend you wanna take me to?”

“I’m Corona. And, I’ll take you to the coroner!” replied the voice.