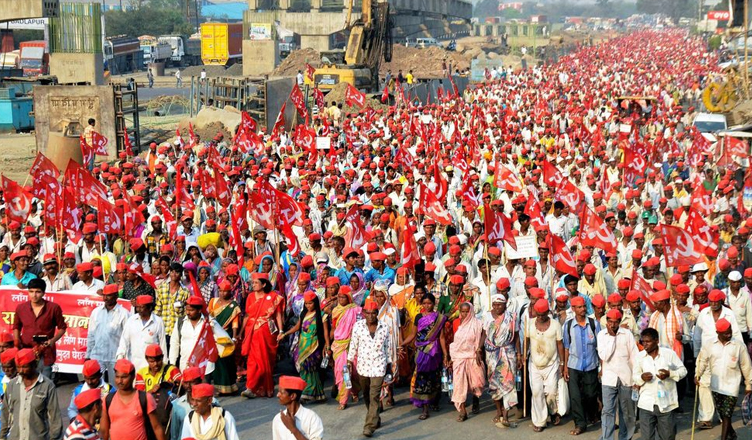 Wednesday saw the participation of over 20,000 farmers in a two-day march in Thane and which will end in Mumbai’s Azad maidan on Thursday.

The demands of the farmers include the promises made by Maharashtra Chief Minister Devendra Fadnavis in March to end the agitation then.

The protesters are also demanding the implementation of the Swaminathan Committee Report, increase in Minimum Support Price (MSP) and a proper judicial system to see to its implementation.

Other demands include drought compensation, complete loan waiver, compensation for crop loss and land rights to the tillers.

“Two bills to ensure these rights were drafted by the All India Sangharsh Coordination Committee (AISCC) and placed in parliament but both bills have been languishing. More than 60 per cent of the voters in India are directly or indirectly dependent on agriculture. The ruling party and opposition will now understand the gravity of this problem,” Avik Saha, leader of Jai Kisan Andolan told NDTV.

The Wire had reported that the Maharashtra government had not fulfilled its promise of recognising forest right claims and swift implementation of the Forest Rights Act.

Marathwada recorded 618 farmers suicides between January and September this year. A report in The Indian Express on Wednesday stated that residents here are left with no other option but to migrate to other place due to acute shortage of water.

The agitating farmers are demanding drought compensation for Rs 50,000 per acre for non-irrigated lands and Rs 1,00,000 for irrigated lands.

Parties such as Congress, Aam Aadmi Party (AAP) and CPM have extended their support to the protesting farmers.

“Damning report on Modi’s demonetisation disaster from the horse’s mouth! Agriculture Ministry admits note bandi hit farmers badly, at time when farmers from across India head to Delhi to mark their anger in the form of a massive Kisan Long March to parliament,” CPM tweeted extending their support to the march.