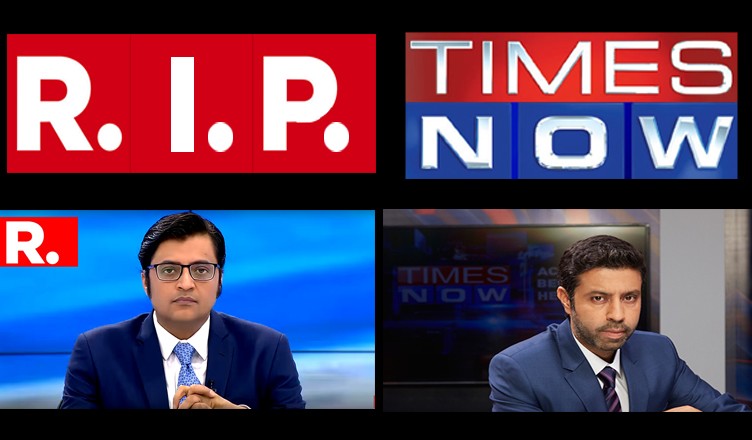 Down came the deluge, and the swelling torrents gushed through our beloved nation,

A bearded man, with his cold eyes and cruel voice said we must celebrate the tsunami,

The Times, they played along, and danced to the Saheb’s tunes eulogising the destruction,

As responsible citizens we must rise and resist, we must persevere with peace, you and me,

We live in dark Times Now, where scribes aren’t afraid to slander, or face charges of libel,

Because they are fed well, by Saheb and his cronies, and will do things repulsive and sick,

Innocent citizens with a mind are hounded on TV and maligned by the ‘anti-national’ label,

To digress from the failures of a weak government that’s turning us into a banana Republic,

Gone are the days when scribes had a spine, and we now have to endure these Times Now,

Times however bad shall pass, as every Republic eventually learns that truth is indomitable,

As citizens rise to defend freedoms, whether Rahul, Ramya or Riyaz, to your grit, take a bow,

Insolence is the manifestation of weakness, and the brutes shall be silenced by people’s will,

The pelf you flaunt, can’t buy you a clear conscience, or wash the blemishes off your soul,

While the fourth pillar crumbles, and democracy is air brushed in the markets of disasters,

Citizens stand in serpentine lines at banks and ration shops, but the scribes can’t resist a dole,

And are unabashedly singing praises to the government, unmindful of the destroyed careers,

Civil liberties and a little bread is all that the citizens of this great, ancient nation seek,

But we live in Marie Antoinettesqe Times Now, in a brash, loud and mindless Republic,

Where the government is defended tooth and nail, despite all the falsehoods they speak,

As bread becomes scarce, the cheerleaders relish their cakes, in blood they dunk and lick,

Meanwhile Saheb and his cronies, and all their flaws go unchallenged and unquestioned,

And no one asks the Reserve Bank of India if they finished counting our deposited cash,

None in the media has the spine to ask why with rising fuel prices the citizens are burdened,

Or why big thugs, like Saheb’s namesake can flee the country with ease, with all their stash,

They continue to prey on citizens with the courage to question the government and resist,

And to the Shamsans and the Kabristhans that the government built, they show us the way,

Not realizing the wolf amongst the sheep, “Our liberties not in peril”, they vehemently insist,

As their cohorts hunt in packs, amplifying the lies masked in screams of Bharat Mata Ki Jai!

One thought on “Our Republic and the Dark Times Now”