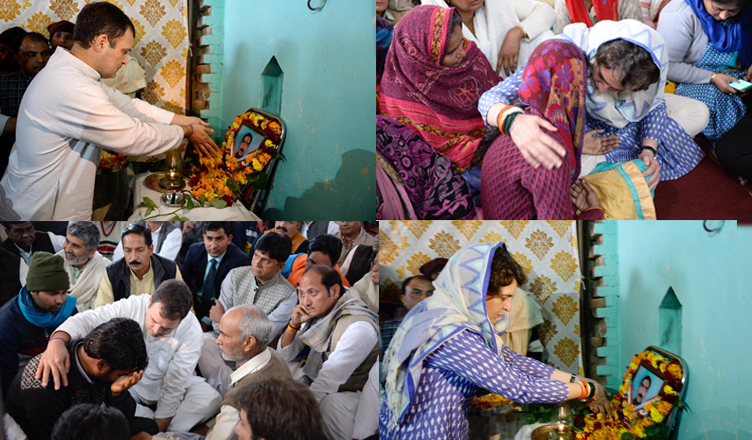 “As his (Amit Kumar Kori’s) father told us that he is sad, but at the same time proud (of his son), I would want to say that we are sad but proud at the same time of the fact that your son showered all his love on the nation and sacrificed his life for the country. My sister said, in a way, our father met the same fate. We understand your pain,” Gandhi said while addressing family members of one of the soldiers, Amit Kumar Kori.

The Gandhi siblings, along with Congress leaders Jyotiraditya Scindia and Raj Babbar attended the prayer meeting for Amit Kumar Kori.

“We have come to sit with you for five minutes. We want to tell you that we are with you in your hour of tragedy. We thank you and your sons on behalf of the nation with all our hearts,” Gandhi further said.

Rahul Gandhi and Priyanka Gandhi also visited Pradeep Kumar’s house, one of the 40 Central Reserve Police Force (CRPF) soldiers killed in the attack, and paid their respects to his family.

The terror attack, which took place in South Kashmir’s Pulwama district, was carried out by Jaish-e-Mohammad.

The suicide bomber, a 22-year-old, was a local militant and he rammed an explosive-laden car into the CRPF bus on the Srinagar-Jammu National Highway.

Around 2,500 personnel were travelling in a convoy comprising 78 buses.

The Pulwama attack in the worst attack and comes after one and a half years after the September 18, 2016 Uri attack, where in the army base camp was attacked by terrorists leaving 19 soldiers dead.

One thought on “Our father met same fate, we understand your pain: Priyanka Gandhi, Rahul Gandhi to jawans’ families”