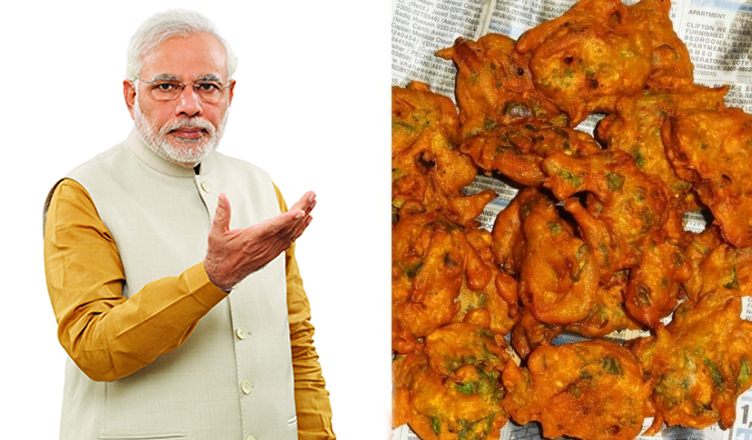 People claim I am hallucinating when I talk about Vikas. But I promise, I do see Vikas often. In fact, on his birthday, April 1, we talked at work. You might wonder, why we work on a special occasion like a birthday. But given the unemployment in the country, we are happy to be employed and we celebrate our beloved supreme leader, Nidra Modi.

And so, in the sultry pantry, Vikas and I grated vegetables to make the next lot of pakoras, as we talked about how cool our supreme leader, Nidra Modi is – so cool that he wouldn’t flinch even if the country faces the most severe contingencies. I must confess, I cannot be so brave. Only yesterday, my best friend burnt her finger while cooking and I felt the pain so much that I almost cried. But Nidra Modi slumbers on with such valour that his bhakts are shrieking in joy and shedding peacock tears.

Of course, old-fashioned people like me still harp on matters like inclusive and sustainable development and don’t see the reality of #NewIndia unleashed by Nidra Modi. We are still miffed that businessmen, and top honchos are flying out of the country after defaulting on loans. We are told that we don’t realise that the defaulters are so scared of Modi that they run away.

“But with the big guys siphoning off money, won’t there be a paucity of capital, which is cardinal for growth. So much corruption can lead to flight of capital..,” I asked Vikas.

“No,” asserted Vikas. “You see, back in 2016, supreme leader, in his hallmark masterstroke got the entire republic of Pulkistan to deposit their hard-earned money into the banks. Now the banks are brimming with money. So much that the Reserve Bank of Modia is unable to count the monies deposited. And to avert a clogging of the banks, the supreme leader is allowing a few of his besties to take the money out of our beloved Pulkistan, so that… capital and economics… and… see…for first time in 70 years, Modiji gave capital punishment… what about, Dalda? What about Dalda? Should we put some Dalda in our pakoras?”

“But Vikas, that made no sense,” I protested.

“It doesn’t have to. I am a proud patriotic bhakt,” replied Vikas.

Since April 1 is when Vikas was born, I didn’t want to ruin his mood. So, I tried to change the topic.

“No. Rafale is no deal,” snapped Vikas. “We don’t have to talk about the deals and the kickbacks and… hey, should we put some Dalda in the pakoras? What about Dalda?”

“I said, Rafael Nadal, the tennis star, not Rafale No-deal…”

“Shoo!” interrupted Vikas, “We never talk about such things.”

“Which things?” I asked.

“We never talk about things like unemployment, federalism, rising hunger, economy, foreign policy… never talk about these things. Have you ever seen supreme leader, Nidra Modi, address a press conference and take questions from journalists? Why do you go against his wishes…and strategic silence?” quipped Vikas.

“Why not talk about them?” I enquired.

“The central government is bored. With nothing to do as acronyms have replaced administration, the supreme leader has taken to writing books. His latest bestseller is Exam Warriors. Unfortunately, the kids not being as smart as supreme leader, despite attending school have made a spelling mistake. Now the Exam Warriors have become Exam Worriers. There’s an acronym for them too – Central Bored of Serious Examinations, CBSE…

With Vikas making no sense and going bonkers, this time I asked him about Dalda, as we fished out the piping hot pakoras from the oil. We packed the fresh pakoras in Modi-like silence, wrapping them in exam papers and pages from a Forbes magazine.

Then, Vikas talked about how Nidra Modi is better than his counterpart in the United States of Armoury, Donny Dump, whose name appeared on the Forbes magazine.

“Donny Dump wants to build a wall to keep people away from his country. But our great leader, is inclusive. He has built Shamshans and Kabristhans, and people are dying to go there,” said an elated nationalistic Vikas.

“Donny is so short-sighted. Bigly Short sighted. He doesn’t know that because of Artificial Intelligence, many jobs will be lost to automation..,” continued Vikas.

“That’s scary. How are we going to endure such job losses,” I asked, in anxiety.

“That’s why our supreme leader has ensured we are all employed as pakora makers, so that no Artificial Intelligence can take away our jobs,” said Vikas, before adding…