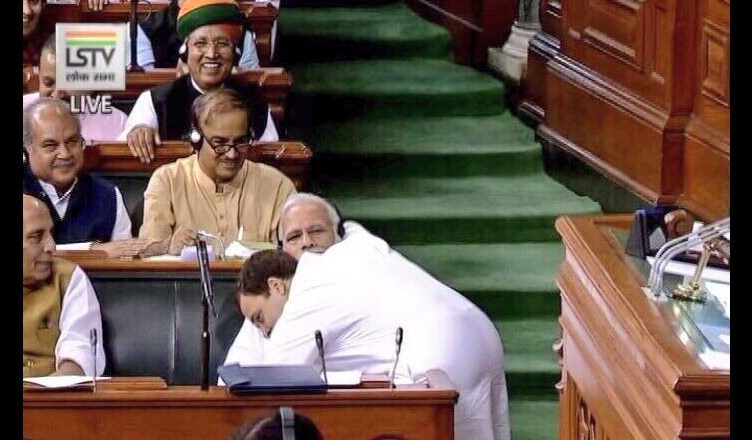 Congress President Rahul Gandhi on Friday ripped the Modi regime apart, by telling the House the country has become the victim of a 21st century political weapon, called ‘Jumla Strike.’

Elaborating further, Gandhi said, “…the symptoms of the jumla strike are great sense of excitement, followed by a feeling of shock and then eight-hour long speeches.”

The Congress chief further said, “The victims of the #JumlaStrike are farmers, youngsters, Dalits and Tribals of the country.”

“Jumla strike no. 1 was the promise of ₹15 lakh in every account.”

“Jumla strike no. 2 was the promise of employment to 2 crore youth every year,” Rahul Gandhi said, while addressing the Lok Sabha.

Taking a dig at the Modi government, the Gandhi scion said, he was grateful to PM Modi, the BJP and the RSS, for teaching him the true meaning of Congress and that of being a real Indian.

“I want to thank them for teaching me this,” Gandhi said.

He accused PM Modi of being a participant in corruption. “I have told the truth about the Prime Minister, and now he cannot meet my eye. He is not a Chowkidar, he is a Bhagidar.”

“There are a few rich businessmen, who are in collusion with PM Modi, and PM Modi works only for them, not for the country’s poor,” he added.

He further questioned the government over snatching the deal from HAL and Karnataka youth and instead giving it to a businessman, who had not built a single airplane in his life and had a debt of ₹35,000 crore.

Taking a jab at PM Modi and BJP President Amit Shah, Rahul Gandhi said both of them cannot afford to lose power.

“The PM and the BJP Chief are different type of politicians. The difference between them and all of us is, we are okay to lose power, but they can’t afford to lose power. If they do, other processes will begin,” he said.

He also said it was the PM’s duty to condemn atrocities, but he doesn’t. “Whenever an oppressed is attacked, it is an attack on Dr. Ambedkar’s Constitution, People of India and this house,” he said.

While ending his speech, Rahul Gandhi said he does not have even an iota of hate for his opponents and that he will help them in removing hatred from their hearts by the medium of love.

“You (BJP) have hate in your hearts for me, you called me ‘Pappu’ and use choice abuses against me, but in my heart I have no hate for you,” he said.

He then went to where the PM Modi was sitting and gave him a tight hug.

He reflected how a true leader should be, by treating his opponents equally and respectfully.