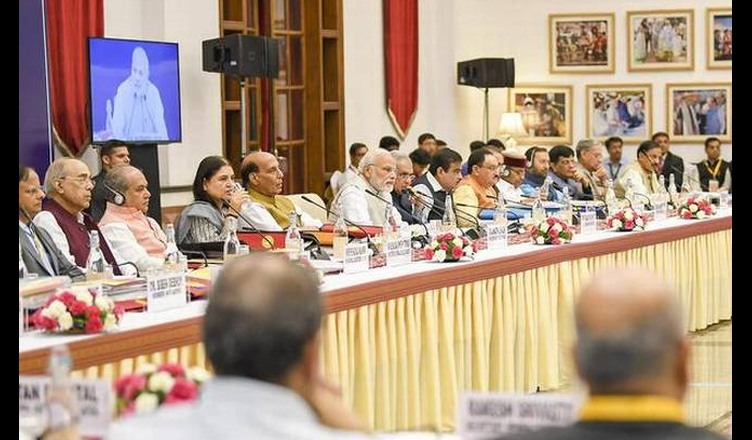 At the meeting of the NITI Aayog’s governing council on Sunday, the Opposition mounted a united attack on the Centre over its economic policies. The Chief Ministers of non-BJP ruled states such as Andhra Pradesh, Karnataka and Kerala – Chandrababu Naidu, H.D. Kumaraswamy and Pinarayi Vijayan – all criticised the implementation of key economic decisions taken by Prime Minister Modi-led NDA government such as demonetisation and GST. The Chief Ministers also called upon the Modi government to share half the estimated cost of the farm loan waiver in their respective states.

The Andhra Pradesh Chief Minister also attacked the Centre for misleading the country and the people of Andhra Pradesh on special category status promised to the state.

Alleging discrimination against Andhra Pradesh in extending special packages for backward areas, Naidu said the Centre allocated only Rs. 450 to the state as against Rs. 4,000 crore to UP’s Bundelkhand region.

Also read: It is the people who alone can make it work

Raising the issue again, Karnataka chief minister H.D. Kumaraswamy sought the Centre’s support in addressing the distress of farmers in his state.

Tamil Nadu Chief Minister Edappadi K. Palaniswami, West Bengal Chief Minister Mamata Banerjee and Naidu also criticised the Finance Commissions. While Palaniswami criticised the Fourteenth Finance Commission which reduced inter re-shares of the state in the divisible pool from 4.969% to 4.023% leading to an annual resource loss of Rs. 60 billion, Naidu raised objections to the Fifteenth Finance Commission’s terms of reference on the use of the 2011 rather than 1971 Census data for population. Naidu said this could lead to a reduction in smaller states’ share in the Centre’s divisible pool and would also bring down their representation in democratic institutions like parliament. Mamata Banerjee seconded Naidu on the same, stating that doing so would amount to penalising states for their better performance in controlling population growth.