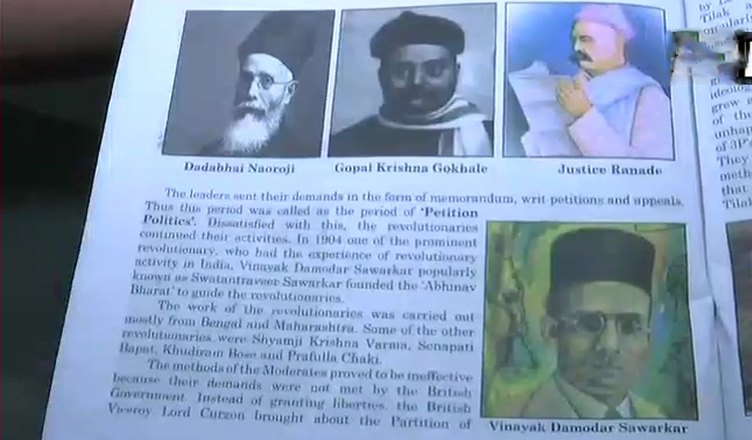 A photograph for India’s first Prime Minister Jawaharlal Nehru has been replaced with that of right-winger Vinayak Savarkar in class 10 Social Sciences book in Goa.

The book ‘India and the Contemporary World II-Democratic Politics’ contained a photograph of Jawaharlal Nehru, along with Father of the Nation Mahatma Gandhi and freedom fighter Maulana Azad on its page number 68.

It is a political science textbook and a part of the Class 10 students’ syllabus in Goa.

“It is very sad that the BJP has removed the photo of Pandit Nehru from the textbook and Savarkar’s photo has been included in the books of the Goa Education Authority,” National Herald quoted Congress-affiliated National Students’ Union of India’s Goa chief Ahraz Mulla as saying.

Mulla claims the current edition of the book has a coloured picture of Savarkar in place of Nehru.

Also read: You can fight, but you don’t need to hate: Rahul Gandhi

“Tomorrow, they will remove the photo of Mahatma Gandhi and question what Congress has done in 60 years,” Mulla further said.

“BJP has been trying to put RSS ideology in our mind ever since they’ve come to power,” ANI quoted Mulla as saying.

Goa is ruled by the BJP-led coalition government.

In another such similar incident, a photograph of Sir Syed Ahmed Khan, the founder of the Aligarh Muslim University (AMU), was removed from a Public Works Department guest house in Khair town of Aligarh and was replaced with Prime Minister Narendra Modi’s photograph.