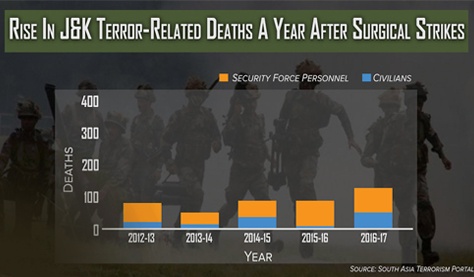 A little over a year ago, on September 29, 2016, the Indian Army successfully conducted surgical strikes across Pakistan as a befitting response to the dastardly terror attack on the Army base camp in Kashmir’s Uri.

Then, Congress vice-president Rahul Gandhi had come out in unequivocal support of the Indian Army, commending the soldiers for their valour and sacrifice for the country.

This was a dignified response of solidarity from the Congress Party, asserting that the issues of national security were beyond the purview of political interactions.

On the other hand, the NDA was quick enough to take credit, with the then defence minister Manohar Parrikar making a series of misleading and petty statements to the effect that this was the first such strike in the history of the country and that no such operation prior to this, anywhere else in the world had been this successful.

However, we know it as a fact, that such operations and as successful as this have been conducted on several other occasions in the history of the country.

A recent IndiaSpend analysis of data gathered from the South Asian Terrorism Portal also raises questions over the ‘most successful’ claim tag that the Defence Minister was so quick to claim. Due to the lack of a coherent government strategy in tackling cross-border terrorism, the dividends reaped by the strikes proved to be short-lived.

As the analysis shows, in the one year following the surgical strikes, in the state of Jammu & Kashmir that has been at the forefront of India’s domestic war on terrorism, deaths due to terrorist-related incidents went up from 246 (2015-16) to 323 (2016-17), an increase by a significant 31%. This is particularly worrisome as the figure confirms a growing suspicion that the number of terrorist incidents and infiltrations may have actually gone up since the surgical strikes. And as always, innocent civilians have been caught in the middle of these prolonged attacks, with the number of civilian causalities from terrorist-related violence increasing five times from 10(2015-16) to 52 (2016-17) (Till September 24, this year).

To put the blame of these developments on the Army and allied security forces would be both reductive and unfair. After all, one can’t blame a farmer for a poor crop if the seeds he sows turn out to have been bad in the first place. The fault, however, lies in the current government’s twin failures of a lack of a coherent & consistent strategy to deal with Pakistan (despite all the loud noises the NDA made in the run-up to the 2014 General Elections) and the complete mismanagement of the political situation in J&K driven by a flawed PDP-BJP alliance that has resulted in the rise of separatist elements in the states to levels never seen before.

This, coupled with the systemic socio-economic isolation of the state by the NDA government has led to the current situation of turmoil and violence that has held the people of the state hostage. Does Modi’s Sabka Saath Sabka Vikas not extend to India’s northernmost state as well?