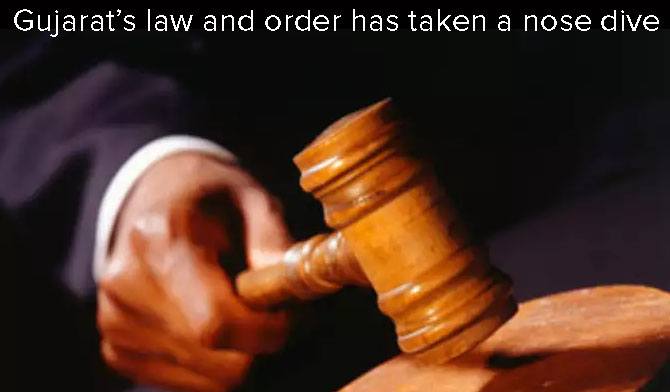 Gujarat’s law and order situation is abysmal. W don’t say it, but the National Crime Records Bureau (NCRB) data for the year 2016 affirms it.

Gujarat is on the top of the list of states in terms of Fake Indian Currency Notes (FICN) seizures. Gujarat police seized FICN worth Rs. 2.37 crore from the state in 2016.

In terms of custodial deaths (also including those under remand), Gujarat comes second on the list with 11 such demises. The state shares its position with Madhya Pradesh, another BJP-ruled state. In terms of the number of suicide cases under police custody, Gujarat ranks third.

In case of acid attacks on women, Gujarat occupies the fifth place with nine such cases recorded. Further, Gujarat’s abysmal record on women safety is reflected in the 3,732 cases registered across the state under IPC section 498 for crimes against women by their husband.

Gujarat ranks 10th on the list for crimes related to cruelty by the husband as well as the rape of girls under 18 (under Protection of Children from Sexual Offences Act or POCSO). Deeper analysis shows that two key cities of Gujarat – Surat and Ahmedabad – feature in the top ten list of all crimes recorded. Surat ranked 6th with a total of 19,844 crimes registered under IPC and SLL, while Ahmedabad ranks 9th with 16,383 crimes recorded.

The new data proves with authority that Gujarat’s law and order under 22 years of BJP’s misrule has taken a nose dive. Be it the state of agriculture, housing, employment, or the state of women – the Gujarat model has come undone from many ends. It is a shame that a state that was once known for its co-operative movement which culminated in India transforming from a milk-deficient country to the world’s largest milk exporter, has now become the hotbed of crony capitalism.

This goes beyond doubt that it is time for Navsarjan in Gujarat and seeing the present worrisome situation, only Congress keeps the ability to tackle the situation and make Gujarat as prosperous as it was before the BJP rule.