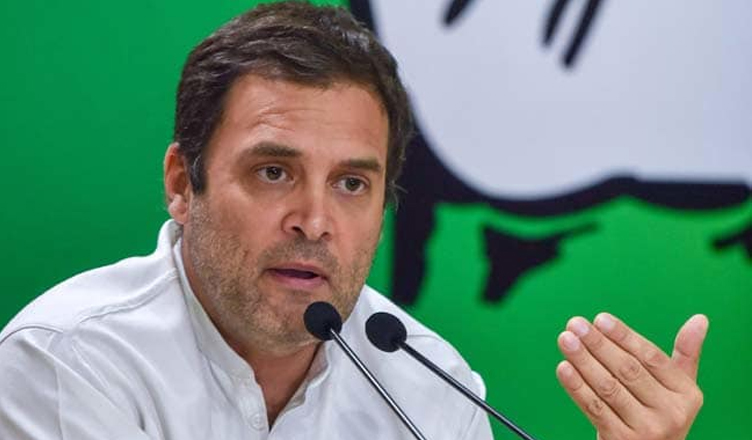 Congress President Rahul Gandhi on Wednesday said that Prime Minister Narendra Modi is a flop show when it comes to job creation.

“Economic growth is directly related to the mood of the country. This is what the BJP and the Prime Minister fundamentally do not understand. We have a real problem with GST. We will reform and simplify it. Job creation is going to happen through small businesses, when they transform into large businesses. We will open banks to these small businesses. Small businesses are under assault. Mr. Modi has attacked them through demonetisation and GST,” Gandhi said while addressing a press conference in Chennai.

“Narendra Modi is a flop show when it comes to job creation,” he added.

Accusing PM Modi of turning the country’s demographic dividend into a disaster, the Congress Chief listed out a number of issues.

“Second important issue today is the state of India’s farmers. I remember Tamil Nadu farmers protesting in Jantar Mantar. I never forget that. Third important issue is the wholesale attack on our institutions and the attack on Tamil culture and language. Not just Tamil Nadu, every state in India is feeling it. Frankly, Tamil Nadu is remote-controlled by the Prime Minister. It is an absolute insult to the Tamil people. It is unacceptable to me. Tamil people should run their own state,” he said.

“Mr. Narendra Modi is turning our demographic dividend into a disaster,” he added.

He further said that the economy has to be put back on track.

“Broadly, the economy has to be put on track. We have a revolutionary idea that we are implementing when we come to power- minimum income guarantee. Tamil Nadu has shown that it has the capability to compete with the Chinese as far as the manufacturing is concerned. The basic idea of the BJP is to capture every single institution of the country. They want the entire country to be run from Nagpur,” he said.

The Gandhi scion then listed out the basic difference between the Congress and the Bharatiya Janata Party (BJP).

“The basic difference between us and the BJP is that we view farmers as a strategic asset for this country, whereas they don’t,” he said.

He concluded saying that currently the government of Tamil Nadu is controlled by PM Modi. “That is what we and the DMK are fighting against. The Tamil spirit should be protected,” he said.

One thought on “Narendra Modi is a flop show when it comes to job creation: Rahul Gandhi”