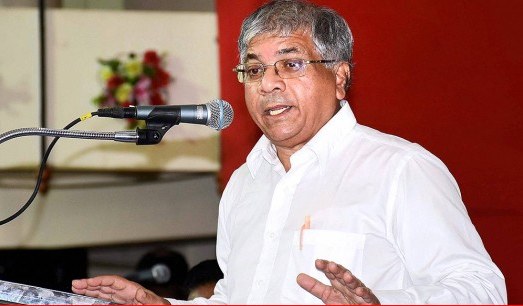 “They want to make a Hafiz Saeed out of India. Just like how people like Hafiz Saeed control the police and state machinery in Pakistan, these Hindutva forces want to rule over India.”

Prakash Ambedkar, the 63-year-old grandson of Indian Constitution’s founder BR Ambedkar, has once again emerged as a focal point for Dalits’ grievances in the country. The national leader of Bharipa Bahujan Mahasangh (BBM), Ambedkar’s call for a state-wide bandh in Maharashtra, to protest the violence against Dalits in Pune’s Bhima Koregaon on Monday, was largely heeded to by major Dalit organisations and the community at large.

Ambedkar spoke to National Herald’s Bhasha Singh on the unfolding aftermath of the Bhima Koregaon violence. Edited excerpts from the interview:

Q: The authorities claim that you enlisted the help of Naxalites to enforce the state bandh called by you. The Rashtriya Swayamsewak Sangh (RSS) even billed your move as a divisive step for the community. How would you react to these allegations?

A: I take strong objections to these accusations. A former Supreme Court judge, PB Sawant, himself lent support to the bandh call given out by us. So, is this government saying that a retired SC judge is encouraging caste politics, Naxalism and divisive politics? The government’s allegations just reflect its anti-Dalit mindset.

The Dalits who had gathered to commemorate the bicentennial anniversary of the Battle of Bhima Koregaon were attacked by Hindu activists from RSS-affiliated outfits. Both, the attackers and those attacked, were Hindus. So, in a way, the true face of Hindutva stands exposed.

Q: So, are you saying that Hindutva forces are intent on killing fellow Hindus?

A: Isn’t the same being reflected in the events that took place in Bhima Koregaon? It is not that such caste clashes are happening in Maharashtra alone. There have been reports of Dalits being targeted by radical Hindu elements even in Gujarat and Uttar Pradesh. Essentially, the BJP and its Sangh allies are against the empowerment of Dalits. Frequent incidents of violence against members of the Dalit community are creating resentment in the community. The BJP believes that just by building tall monuments commemorating the legacy of BR Ambedkar will make Dalits forget these atrocities that are happening against them. They are saying that they will build five religious centers in the country, where Dalits can come together to celebrate BR Ambedkar’s legacy. But they don’t understand that they just can’t control the minds of Dalits by these sops. The Dalit is smarter than the BJP and the RSS think he is.

Q: The BJP-RSS combine used to target Muslims till now.

A: Yes, certainly. The RSS and its allies thrived on spreading anti-Muslim hatred till recently. Now, they are targeting the OBC and Dalits. They are pitting a Hindu against another Hindu, all in the name of creating a Hindu nation.

Q: To what end? What are they trying to achieve?

A: They want to make a Hafiz Saeed out of India. Just like how people like Hafiz Saeed control the police and state machinery in Pakistan, these Hindutva forces want to rule over India. They want to turn India into a banana republic. We are standing in their way.

Q: Do you think that violence against Dalits in Bhima Koregaon was pre-planned?

A: Hundred per cent. They wanted to teach Dalits a lesson. They are fed up with Dalits asserting themselves politically as a community. They are of the view that Dalits, who according to them occupy the lowest rung of the archaic caste system, don’t have the right to celebrate their history.

Q: How far do you plan to take this movement?

A: The Dalits will keep protesting until Sambhaji Bhide, the head of Shiv Pratissthan, and Milind Ekbote, the leader of the Hindu Janjagruti Samiti, are arrested. However, the matter will escalate in coming days, as the Maharashtra government, instead of arresting Bhide and Ekbote, has filed an FIR against Dalit leaders. The boiling anger against the incident is spreading nationwide. Dalits want authorities to take action against perpetrators of Bhima Koregaon violence, and they will agitate until justice is served. If the government keeps dragging its feet, the protests will spread to other states. Already, there are solidarity meetings happening in Uttar Pradesh, Madhya Pradesh, Karnataka and Andhra Pradesh.