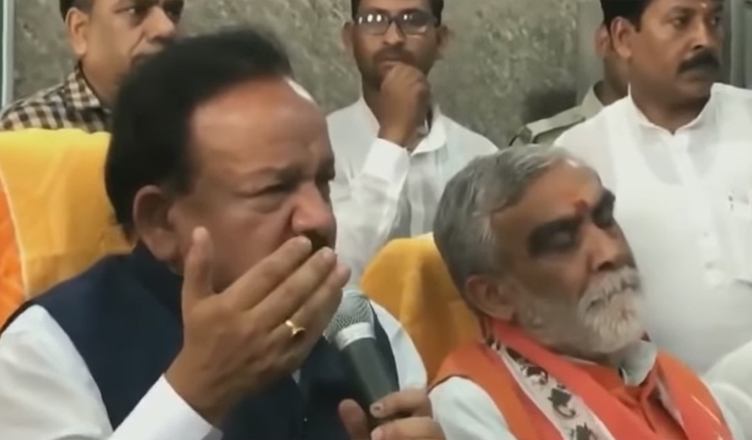 After Bihar Health Minister Mangal Pandey was seen taking an update on the India-Pakistan cricket match during a meeting over the outbreak of Acute Encephalitis Syndrome (AES) in Muzaffarpur on Sunday, another insensitive incident has come to light.

During a press conference held by Union Health Minister Harsh Vardhan in Muzaffarpur on Sunday, Minister of State (MoS) for Health and Family Welfare Ashwini Kumar Choubey was caught sleeping.

Consulting Editor for TV9 Bharatvarsh, Ajit Anjum, posted multiple pictures of the minister sleeping through the press conference and pretending to be alert when waking up occasionally.

When posed questions the same, Choubey replied by saying that he was busy in “manan chintan (deep thought).”

In another such incident, Bihar Health Minister Mangal Pandey was seen asking about the India-Pakistan cricket match during a meeting with central ministers over the outbreak of Encephalitis in Muzaffarpur.

A case has been registered against Union Health Minister Harsh Vardhan and Pandey in Bihar’s Chief Judicial Magistrate (CJM) court by social worker Tamanna Hashmi for not spreading awareness about encephalitis prior to the outbreak. The case will be heard on June 24.

Bihar: A case has been registered against Union Health Minister Dr Harsh Vardhan and Bihar Health Minister Mangal Pandey in Muzaffarpur for not spreading awareness about Acute Encephalitis Syndrome (AES) prior to the outbreak. (file pics) pic.twitter.com/UdHhqJYXtu

Death toll due to encephalitis reached 104 in Muzaffarpur on Monday. According to official data, as many as 80 children have lost their lives in Sri Krishna Medical College and Hospital (SKMCH), while 17 have died in Kejriwal hospital.