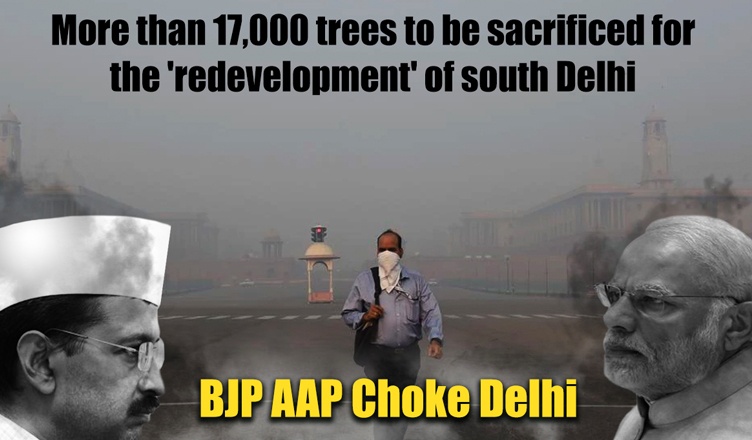 Over 17,000 trees are to be cut down in the national Capital for redevelopment of accommodations for central government officials in Sarojini Nagar, Netaji Nagar, Nauroji Nagar, Mohammadpur, Tyagraj, but thanks to the Delhi High Court, which has National Buildings Construction Corporation (NBCC) to not cut any more trees in Delhi till July 4.

However, the Aam Aadmi Party (AAP) government has been hugging trees coming out in support of those protesting the decision, the fact remains that it was the AAP govt in conjunction with the Bharatiya Janata Party (BJP) that ordered the felling of more than 17,000 trees.

In her letter, she mentioned about the air pollution which the residents of the decided areas were facing, and how the felling of trees would degrade the air quality further.

Also, the residents of colonies like Sundar Nagar and Pandara road have unequivocally stated that despite the order the trees are still being cut – between the hours of 2-4 am.

Delhi air pollution has already hit hazardous levels and the air quality is worse. With the cutting of over 17,000 trees, the environment of Delhi is only inclined to get even worse.

Just for their own comfortable and luxurious homes, the AAP and the BJP have conveniently ignored about the lives of the people living in Delhi.