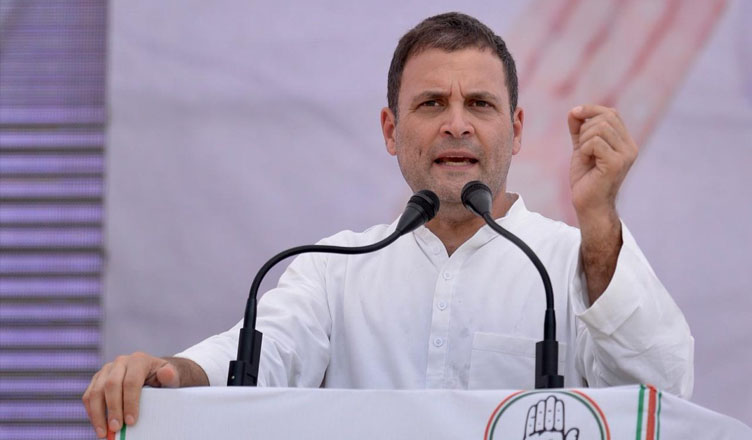 Congress chief Rahul Gandhi on Tuesday hit out at Prime Minister Narendra Modi saying that he works only for his rich industrialist friends and not for the people of India.

“Wherever Mr. Modi goes, he makes false promises. He promised 2 crore jobs, 15 lakhs in every account and right MSPs to farmers. None of these were fulfilled,” Gandhi said while addressing a rally in Madhya Pradesh’s Sheopur.

He further attacked the government and said that petrol prices in India are increasing even when the global crude oil prices have fallen.

“PM Modi is taking money from people’s pockets and filling the pockets of a handful of rich corporates,” he said.

The Gandhi scion further said that everybody knows who was involved in the Vyapam scam and e-tendering scam but yet, none of them were arrested.

“Vyapam scam destroyed education in Madhya Pradesh. Those who committed the scam were never arrested. Everyone knows who was involved in the e-tendering scam,” he said.

Gandhi further said that issues, such as farmer crisis, unemployment and hunger are prevalent in Madhya Pradesh but state Chief Minister Shivraj Singh Chouhan has done anything to solve them.

“Madhya Pradesh is at the top in malnutrition, atrocities against women, farmer suicides, unemployment and last in terms of development. The whole country know this. PM Modi and CM Shivraj Chouhan have not solved any of these,” he said.

He then appealed to the people of the state to vote for Congress and see the face of Madhya Pradesh changing.

“Yyou have heard the promises of Modi and have seen the truth also. This time, support the Congress party. We will change the face of Madhya Pradesh,” he said.

Gandhi will address two other rallies in the states today, one in Sabalgarh and the other in Joura.

Later in the day, Gandhi will also hold a roadshow from Joura to Morena.