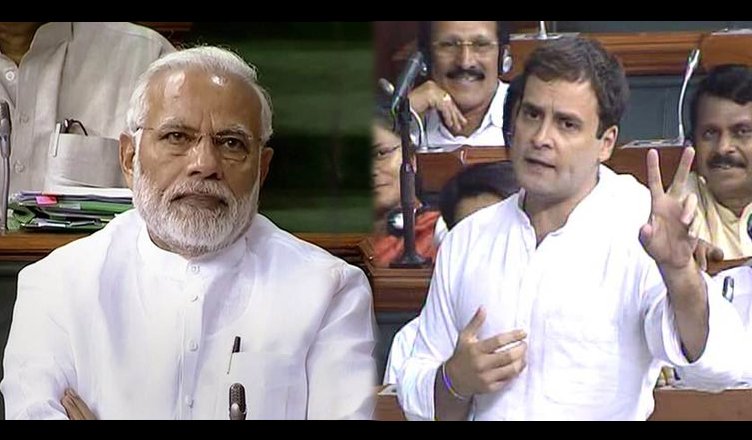 After Congress Chief Rahul Gandhi’s speech in the Parliament on Friday, a Twitter user wrote, “BJP won the no-confidence motion. Rahul Gandhi won the confidence.” We could agree no less!

As soon as Gandhi finished his speech, Twitterati went berserk with praises pouring from all sections applauding the Gandhi scion for his exceptionally good address.

They praised the CP for his exemplary speech and called him a ‘true leader’. For all the criticism the Congress has received for not acting like a true opposition, Gandhi’s speech has turned tables on the BJP.

Even those who weren’t really sure of Rahul Gandhi as a leader, their opinion changed with the power-packed speech.

Many prominent people from various industries – be it actors, politicians, journalists, comedians or activists, were impressed by Gandhi and warned the BJP of facing a strong opposition in the 2019 Lok Sabha elections.

The best part of his entire speech was where he walked towards the Prime Minister and gave him a hug. PM Modi was shocked. He could not imagine an opposition leader coming to him with such respect and love.

At the end of the marathon #NoConfidenceMotion, when the time came for PM Modi to speak, he obviously fell short of words and facts as well.

Modi resorted to his old trick of beating around the bush and crying hoarse about #AccheDin that India has witnessed over the last four years.

Nervousness was writ large on Modi’s face and despite him trying to cover it by smiling, he absolutely failed at it.

Let’s have a look at some of the praises Gandhi received on Twitter:

Rahul Gandhi's #JaaduKiJhappi will go down in history.

It is an epic gesture in times when hate, trolling, mob lynchings, communal polarization have become a common thing in the country.

In awe of @RahulGandhi . When you speak the truth & speak it from the depth of your heart it really shows ! Many hearts have been won today.
It truly was a speech that has made the #NoCofidenceMotion historic ! Respect ????

By far the best speech by Rahul Gandhi in Loksabha. Now he is the true opposition leader. This could inspire entire opposition. Attack is the best policy!
My rating: 8/10#NoConfidenceDebate

Clearly Modi doesn’t enjoy his Desi hugs as much as the phoren ones. pic.twitter.com/UMRQ2cSKT3

Today I saw someone standing up to all his bullies in the house… These words maybe something you won't want to accept but after 4 long years we've an opposition Congress is back!

Very aggressive @RahulGandhi in Parliament today, several issues raised from jobs to Rafale to Doklam. “The PM has not been truthful”, says Rahul. Expect @narendramodi to respond very strongly later on

A power-packed speech by @RahulGandhi delivers "chowkidar nahin hai, bhagidar hai" as the most powerful punch & sets the #Opposition agenda for #LokSabha elections. @BJP4India is no longer the opposition, it will need more than just anti-Congress slogans #NoConfidenceMotion

Thinking of the one MP from the Treasury benches who stood up before #RahulGandhi started and yelled in jest “Bhoomkamp aanewala hai!” Dear bhaisaab, BJP is looking for you ?

Fantastic speech by @RahulGandhi! He has consistently been speaking a language of decency and love in the face of hate and propaganda. That takes courage. Our public life needed that. Today, he took that to another level in Parliament. Reclaimed what it means to be Hindu too!

people bullied #RahulGandhi , they called him all sorts of names. He owned each one of those names, he extended an olive branch to his opponents, and thus, turned the needle on shame on his bullies. Kudos @RahulGandhi

.@RahulGandhi hugged PM @narendramodi after his speech, we hugged people in the Mirror Now's newsroom after a stressful day #FindYourReasonToHug #RahulHugsModi pic.twitter.com/2AQKLDGpvb

Gandhi sounded the poll bugle for 2019 in the most beautiful and peaceful way. He has given the BJP a clear warning enveloped with respect and love.

People are all for Rahul Gandhi – his words and expressions – in the House on Friday.

Check out some quotes from Rahul Gandhi’s speech:

His concluding lines wherein he talked about the real meaning of Congress and a true Hindu left the BJP numb, with PM Modi trying to hide his embarrassment by a meek smile.

Rahul Gandhi is not there to be pulled down anymore, and he gave the same message to his opposition yesterday. The rise of a leader is now unstoppable and the BJP has all the reasons to worry.