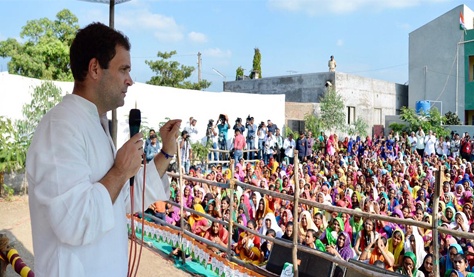 “It is strange here! Jay Shah started with Rs. 50,000 and it then jumped to Rs. 80 crore. This is Modi ji’s ‘Start-up India’, ‘Make in India’, said Congress vice president Rahul Gandhi at Nadiad on the second day of this three-day “yatra” in poll-bound Gujarat.

Congress Vice President Rahul Gandhi tweeted on Monday wondering if Modi was a “chowkidar” or an equally guilty accomplice to the case.

The report in The Wire that first exposed the corruption of Amit Shah’s son showed the nation how hollow the promises made by the man who promised to be “chowkidar” were.

Well, the BJP left no stone unturned in assuring that the media did not give prominence to the report alleging corruption.

It is not shocking as paid media has become a thing of the day and majority of the news channels have forgotten the essence of journalism.

They have reduced themselves to merely puppets in the hands of the Modi Government.

Let’s bring to your notice something. The Congress’ ‘hand symbol’ stands for an assurance– “Daro Mat” (Fear not).

The same was stated by Rahul Gandhi at Janvedna Sammelan earlier this year.

“Fear not, the party is firmly behind you.” To the media persons who feel stifled in the environment created in their newsrooms, we say, “Fear not. Defamation cases will not stop you when the truth is on your side. You have our full support. We will fight for your right to write.”

Nothing has changed. Even today, Rahul Gandhi is as critical of the Modi Government as he was before. He has never minced his words. Even if he acknowledged Modi as his Prime Minister as well, he did not hesitate to criticise him for his failure to create jobs and leave the economy tumbling.

As far as Jay Shah’s case is concerned, one thing is clear. No matter how hard the BJP tries to brush it under the carpet, the truth will not be hidden.